Boy, this pandemic is killing my blogging output. How can a virus weaken one's blogging without the writer getting the disease, you ask?

Well, first came the lockdown, those months when we were all suddenly at home doing jigsaw puzzles and watching Tiger King. (Okay, so maybe you resisted that. I didn't.) I started digging through old files and decided to write a book. By the time The Rise and Fall of an Eighties Sherlockian came out earlier this year, I had pretty much decreased my 2020 blog posts to almost half the number of the year before.

And then, even as that project finished and 2021 began, what happened? I kicked off The Sherlockian Chronologist Guild and its monthly newsletter, Timelines. A fairly niche topic right? Shouldn't take up all that much mental space, right?

Twelve monthly issues later, with a grand total of twenty-six subscribers, I have learned otherwise. There are more rabbit holes to Sherlockian chronology than most ever suspect, and as tiny as twenty-six subscribers might seem for any normal area of interest, I was dead sure the entire Sherlockian world was going to have no more than eight interested parties. You don't do Sherlockian chronology for popularity, that's for darned sure.

But what did that chronology occupation do? Drop my blog post count from 2020's all-time low by another twenty percent!

And as 2021 starts, I find myself occupied by January 14's Pub Night at the Dangling Prussian, which has gotten my few blog posts of late. Throw in some other hot topics that I am trying to keep my mouth shut on for various reasons, and my output for the month of December has hit an all time low of TWO posts so far. While always a busy, distracting month, December of 2018 had twenty-nine posts as I was reading fics and going to see Holmes and Watson multiple times while its short run in theaters held up.

But the pandemic hasn't killed this blogger* (*yet!) so we shall hope that 2022 brings more things to write about that aren't sidelined off to the chronology corner or some tome on the eighties.

Posted by Sherlock Peoria at 7:38 AM No comments:

The Canon of Afterlife Sherlock Holmes

This, of course, was American writer John Kendrick Bangs, who, it seems, possessed an enchanted typewriter, capable of being operated by those on the other side of the veil. There were four books in the series of afterlife accounts from Bangs, A Houseboat on the Styx, The Pursuit of the House-boat, The Enchanted Typewriter, and Mr. Munchausen. All are out of copyright and available on Project Gutenberg, and the middle two of the series, published in 1897 and 1899, feature Sherlock Holmes. 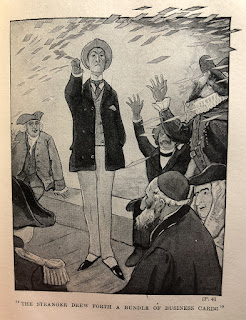 And here's the thing: In both those books, Sherlock Holmes tells of a previously unpublished case.
In The Pursuit of the House-Boat, we find "The Brighton Mystery," which Holmes tells to his fellow Shades in chapter seven. And if you think Watson made Sherlockian chronology confusing, Holmes says the case  was "some ten years ago when I first took up ferreting as a profession." He and Watson were spending that summer together in a Brighton hotel at a time when books being sold about him were already stirring autograph-seekers to come after him.
In The Enchanted Typewiter, we get Holmes teasing a full book called Memoirs I Remember written by Holmes himself with twelve new stories. The first is called "WHO THE LADY WAS!" in which Sherlock Holmes returns incognito to living London "by a special dispensation of his Imperial Highness Apollyon" after being dead three years to find the world's largest diamond for the Queen's Diamond Jubilee, when an amnesiac woman poses a second puzzle for him. (Shades of The Private Life of Sherlock Holmes!) Apparently the afterlife has done Holmes no favors, as "Lion's Mane" or "Blanched Soldier" this is not. (And, c'mon, even those aren't Watson-quality.)
Is there enough in those two appearances to get a real feel for this post-life Sherlock Holmes, for some current author to attempt a full-blown pastiche of Holmes in Hades? Is it even possible to out-do Bangs himself in this case for a fellow American, easier than topping ACD? John Kendrick Bangs was definitely a writer of his times, and maybe not as timeless as other "classic" writers, so a modern take on that curious incarnation of Sherlock Holmes might even be more enjoyable for our fellow moderns.
There is surely some fun to be had there. 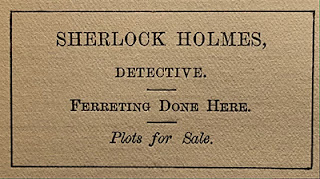 At the end of October, I decided that instead of participating in "NaNoWriMo" (National Novel Writing Month) this year, I would devote my month to "NaChronoWriMo" and spent the time with Sherlockian chronology. Was my final word count the hoped-for 50,000 that NaNoWriMo participants shoot for?

But I did make it through the entire Canon, and met goals that went beyond word count. That word count also did not count writing for the Sherlockian Chronology Guild's monthly newsletter Timelines, a sideline that has definitely cut into my blog-posting time this year.

Other excuses? The sudden rise of the Dangling Prussian virtual Pub Night on Zoom, January 14th. As is always the case with our diversely multi-tentacled Sherlockian hobby, just as you're fighting to extricate yourself from one tentacle of the beastie, another one starts to wrap itself around you and demand your attention. (And if that metaphor was just a little too exciting to you, we know where your internet searches have been taking you. * wink *) (Hey, it's another blog post on Sherlockian chronology! I had to make it more exciting somehow!)

It's been a good month of chronology work, though, the results of which will, I hope, come up before too long, into the pubic view.

Posted by Sherlock Peoria at 8:23 AM No comments: