The KRM. Worth a re-watch?

It has long been suggested that I judge things too quickly, and maybe that's the case with this week's Elementary. In my earlier report on "The Man With The Twisted Lip" (CBS version), I proclaimed that the Killer Robot Mosquito (or KRM, as I have come to affectionately call it), was the shark-jump for the show. But after a day of that cyber-insect buzzing about my imagination, I realized what it truly was.

It's the robot dinosaur that elevates Elementary to the level of the Baker-Street-Babe-beloved Asylum Sherlock Holmes: the moment where Elementary finally goes from "just bad" to "so bad it's good."

So I had to watch it again.

The girl over Mr. Elementary's left shoulder looks severely creeped out by his "I am without peer" speech at the start of the episode. Or maybe she's thinking of Philip Jose Farmer's The Adventure of the Peerless Peer, a goofy team-up pastiche of aged Sherlock Holmes meeting either Tarzan or Mowgli, depending upon which edition you managed to get your hands on. I think I made a face like that, too, when I read it.

The dinner party with Mr. Elementary, Brother Elementary, Joan, and Miss Hudson that follows the credits features the great line "Have you come back here to sleep with Watson again?" -- a question the Sherlockian Canon somehow never got enough of. How Miss Hudson sits through the entire conversation between the Elementary brothers and poor abused Joan without breaking out laughing is a mystery one of these detectives should solve . . . though her lack of a single post-credit line makes one wonder if the reason wasn't some paid-by-the-line budget issue.

Captain Gregson also seems to be getting out of the episode as soon as possible after Mr. Elementary does an amazing off-camera job of riding a bicycle to trail a drug dealer back to his hideout and orchestrate an arrest. (Hey, filming bicycle chases through New York costs money!)

Brother Elementary luring Joan Watson to his Diogenes restaurant by waving desserts under her nose, then hitting on her, is about as creepy as his monotone "romantic" propositions. If this were a WWE wrestling show, an entire arena full of fans would have been chanting "BOR-RING! BOR-RING!" at the top of their lungs, but hey, they're used to better acting. Watson's stuttering "I'm so flattered . . ." sounds like every kindly cheerleader who ever got asked out by the head of the local Star Trek re-enactors guild. And somehow, Mycroft still keeps Joan at his empty restaurant so late she comes home and goes straight to bed.

But Joan has to get her beauty sleep, because Mr. Elementary is going to be standing by her bedside at some moment just after dawn as usual. This time, he's holding breakfast on a tray instead of a turtle, though, because we can't have Miss Hudson and Clyde in the same episode. And then Harriet Tubman enters the picture. (Random trivia element! DRINK!)

The missing person for their missing person's case has a Harriet Tubman plaque as her song-writing companion. One would hope for at least a statue to qualify as a "companion," but apparently the missing Page had as low budget for her life's supporting cast as the rest of the show.

The invisible Killer Robot Mosquito makes its first non-appearance just  after the sixteen minute mark of the episode, and only Mr. Elementary can see him. Detective Bell just supplies the "It's too early in the year for mosquitos," so Mr. Elementary can respond with an almost Canonical "That's why I mentioned it." Except he throws the line away in his newfound quiet tones. After a season and a half of noisily squawking when he didn't have good Sherlock-Holmes-like responses, Mr. E. throws away his "That is the curious incident!" moment with a near-mumble.

But poor Mr. Elementary has to deal with his brother trying to date his pal Joan . . . a brother who has mysterious Frenchmen in his restaurant receiving packages at the same table. The brothers Elementary have a long whisper-conversation in which the one supposedly dating Joan calls her a "sow." Of course, if one "try some desserts at my restaurant" is "dating," then Killer Robot Mosquitos follow Mr. Elementary around . . . oh, wait, here's our friend the KRM!

At this point we also learn about another robot that carries a shotgun. "Drone" may be the word all the cool kids are using these days, but you know Mr. Elementary is talking about another flying robot. Especially after he finds some paintball-shooting flying robots on YouTube or it's Elementary-world counterpart. Since we don't actually ever see the shotgun-wielding flying robot, I'm going to deduce that it was KRM and a group of his friends hauling the shotgun around. Makes as much sense as anything else going on here.

If you ever need to interrogate a psychiatrist, here's a tip: Make sure he hides banned Italian candy eggs with an illegal choking hazard toy inside in his community garden plot. Threatening to arrest a guy for illegal candy is always the best way to get a doctor to violate doctor- patient privilege, isn't it? I mean, it's not that unusual, right? Not like the odds of him getting attacked by a Killer Robot Mosquito . . . oh. Whoops.

Ah, KRM, how can I ever hate you? You are the best thing to come out of Elementary in two years!

Mr. Elementary likes holding messages in front of cameras to communicate with people. And this time he's doing it to talk to C.O.O. Kenneth Carlson, KRM's "daddy." Perhaps Carlson will pay to get KRM his own sober companion so he can have his own spin-off series. Well, one can hope, can't one?

If Joan's horrible dating skills put one off of her this episode, her ability to break into a safe using a car-jacking tool, sliding a piece of metal in the crack at the top of the safe door, should make up for that fact. I have never seen that technique employed in any TV show or movie before, so it must be cutting edge. Or safes have gotten really cheap, unbeknownst to me.

Of course, the way Joan gets chloroformed and thrown in a van faster than B.A. Baracus being sent off on an A-team mission make one wonder about her other detective skills. Seems a very Nigel Bruce move.

"The Man with the Twisted Lip" is, perhaps, one of the most re-watchable episodes of Elementary ever, thanks to KRM. But I'm still a bit baffled as to why they entitled it after the Conan Doyle story of that same name. Comparing Mr. Elementary's A.A. meeting to the rascally Lascar's opium den is a bit of a stretch, and, unfortunately, we get no Mrs. Neville St. Clair in a flimsy nightie.

The whole Mycroft-Joan relationship subplot is so tortured that Dick Cheney will probably claim it as an effective counter-terrorism measure. And are we going to finally find out that this version of the elder Holmes brother is the French government, instead of the British one? (Hey, they can't copy Sherlock, even if Sherlock is just using the original source material . . . which is soooo unoriginal, isn't it?)

I really shouldn't re-watch these things. Curse you and your cute metallic hide, KRM! 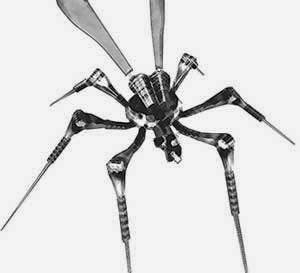 You should see him with his shotgun!

Posted by Sherlock Peoria at 11:20 PM