Around the edges of a viewing.

Sunday night was such a lovely evening.

Not going to talk about that certain program here. Lord knows there is enough of that going on right now . . . the previous post felt almost too self-indulgent. But the eve of January first, for completely separate reasons, found myself and the good Carter ensconced in a Hyatt not too far from home having a bit of celebration. Before heading out to a nice dinner, I made sure the local PBS stations would be running on the nice-sized flat screen in the hotel.

It turned out that Sherlock reruns were already playing, but when we returned from dinner, a different program was on: From Vienna: The New Year's Concert 2017, featuring the Vienna Philharmonic and the Vienna State Ballet, with scenes filmed all over the city and a boatload of Johann Strauss tunes. Not my usual fare, but my trusted companion prefers such stuff and it's pleasant enough. (Orchestras have violins, and you know, Sherlock, violins . . . close enough for Sherlockiana.)

Besides . . . Austria. Sherlock Holmes and John Watson's last glass of wine we see them having together was from Austria, from Emperor Franz Joseph's special cellar. One of Franz Joseph's other palaces was featured in the concert broadcast.

But it wasn't all Strauss and Vienna in the lead-up to Sherlock season four. We're ridiculous multi-taskers these days, so there was this: 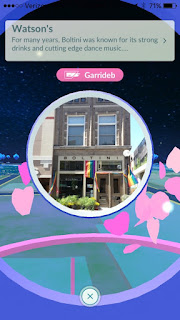 That, for the blissfully uninitiated, is a pokestop with a lure on it, as a part of the game Pokemon Go. Between tweeting and concert-viewing, I was also twirling the Watson's pokestop every five minutes for supplies and catching charmanders and bulbasaurs. If this sounds completely immature to you, I will refer you to the paraphrase tweet that came to me later during a sleepless moment:

"I'm not an adult, I'm a high-functioning thirteen-year-old."

In any case, a lovely rendition of "Blue Danube" inspired a bit of bad waltzing before Sherlock finally showed up, and it turned out to be a happy evening altogether. Pity about you-know-who.

Which brings us to the ironic-not-ironic-amazing part of all of the above. Sherlock Holmes and John H. Watson were partners in crime for seventeen years, according to the good doctor. The good Carter and I were out early celebrating being a little past twice that number.

And Sherlock has been with us every step of the way, amazingly enough. Dates to scion meetings, quote and Paget on the wedding program, Holmes mystery after-wedding-party, and many story after that. So it was really okay that he got to come to our latest little party.

And, like I said, it was a very lovely evening.
Posted by Sherlock Peoria at 10:45 PM