During my college days of the 1980s, I remember going to Double-Barrelled Tiger Cubs film nights at the university of Illinois, wherein great fun would be had at the expense of Nigel Bruce. His wacky Watsonian exploits could be made even funnier if you ran the film backwards during his scenes, which occasionally happened. And while Basil Rathbone's Sherlock Holmes did not compare as a target for mockery, there was one aspect of his character that did: his war years hairstyle. 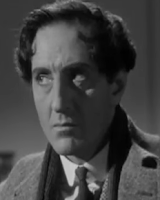 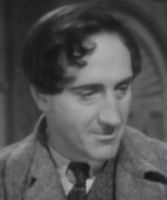 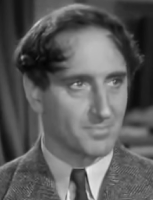 Now, I'll admit, as a young and silly college fellow from a less accepting time, I did join my fellows in mocking this Sherlock's choice of coiffure. It seemed a bit "fancy" for a man, especially a keen logician like Sherlock Holmes. But with the wisdom of the passing years, and the changing of the times, I'm now gaining some new insight into Sherlock Holmes's war hair.

First, of course, is the fact that Sherlock Holmes was not just created as a science-detective, he was also modeled after an artist as well. His whims, his experiments in perception, and, of course, his own references to his "art" of detection. But that would be reason for Sherlock Holmes to wear fancy hair throughout his life, not just in that particular period. So why then?

Because, and I am serious in this, it was Nazi-fighting hair.

When Sherlock Holmes set to out-smarting Nazis in the 1940s, he was, like all Englishmen and Englishwomen, intent on battling them on all fronts. And what was one way of striking at the core of Nazi beliefs?

Exactly what Jesse Owens did in the 1936 Olympics. He showed Adolph Hitler that a black man could best Hitler's so-called "master race" with ease. And what class of people did Hitler hate besides those of other races and religions?

Whether or not you're a fan of W.W. II Johnlock shipping (and with Nigel Bruce in the picture, I doubt there are many who are), wearing a more effeminate hairstyle as a man living with another man probably cast Sherlock Holmes as less than a macho figure in German eyes. He wasn't even man enough to join the military after all! So to have this fancy-haired fop dealing major damage to such major German operations as the Voice of Terror would just add insult to injury in Hitler's eyes, just as Jesse Owens did in the Olympics.

And who knows? Maybe some more detail-oriented Sherlockian could make a case for Rathbone's Sherlock being in the closet. But that hair, that bold choice of hair artistry in a time when most were wearing Army-grade buzz cuts and other more serious styles, that hair makes a statement.

And the statement that it was making was surely flipping the bird (or in this case, the curls) right at ol' Adolph himself.

Because that's Nazi-fighting hair!
Posted by Sherlock Peoria at 10:21 PM