"Watsonian" a new level above "Sherlockian?"

Okay, full honesty here. Until this year, I was very reluctant to join the John H. Watson Society for one very awful reason: Sherlock Holmes is the reason I'm in this hobby, and as fond as I am of ol' John H., he's always been . . . well, the second banana who couldn't exist without the main man.

You know, as I grow older and wiser, sometimes I actually know when to stop digging myself into a deeper hole.

Anyway, bit by bit, I started to be impressed by the efforts of the John H. Watson Society, despite not being a participant. They soon proved to be more than just a well-funded rehash of a 1980s-style scion society as new members came in and brought some impressive skillsets with them.

The Watsonians have done some good stuff (though that torturous "Treasure Hunt," well, we can talk about that), but this week. Wow. This week.

Don't think I've been as impressed by a single Sherlockian publication in a very long time. Coming in at 148 pages, the latest issue of The Watsonian is a remarkable collection of work. Living in the attention-deficit-disorder mode that the world can inspire these days, I get surprised when I find myself suddenly past the halfway point of a book that's not been in the house very long, and the weighty Watsonian counts as a book. This issue is good. Very good.

And it makes me laugh, too. Remembering certain Sherlockians of a couple decades ago who were SO certain that all the great Sherlockian scholarship had been done, who also had no idea just how smart Sherlockians could get as the decades passed and new tools became available, international cooperation became more commonplace, and minds opened to a few more possibilities.  Yes, we still do some silly fandom stuff, as always. But man, the sharp Sherlockians . . . er, Watsonians . . . out there are razor keen. And hard working.

So, you want to add to your brain's contents on Sherlock's favorite violinist, Watson's war service, proper name pronunciation, a special Russian adaptation, as well as enjoy some nicely varied fiction, well, I heartily recommend the Fall 2017 issue of The Watsonian.

And, full disclosure, a bit of the fiction in it is mine, but that's not why I'm promoting it. One tends to want to cover up one's mistakes, but this issue is good enough I'm promoting it anyway. Turns out I left a word out of what I wrote for the issue, and I'm rather embarrassed about that. Not sure how it got away from me. If you'd like to make the correction for me on your copy, see below. It's on page 44. Just use your imagination if you like keeping things pristine. Thanks! 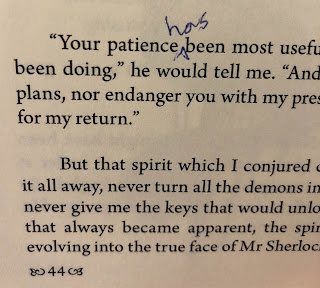 Posted by Sherlock Peoria at 9:31 PM