There's a popular myth that the human body regenerates itself every seven years. It's not true, of course . . . blood cells don't live very long, brain cells (with luck) last a lifetime. But there's a reason we like that notion. Live long enough, and it feels like you've led many different lives . . . even as a Sherlockian.

In trying to find a particular bit of info this morning, I ventured down to the ancient bowels of Castle Sherlock Peoria and found the spot pictured below. 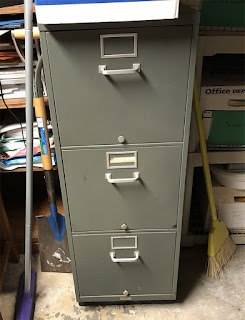 Pulling open the top drawer, I was confronted with dozens and dozens of that physical incarnation of my computer desktop's many file folders.

After years of use and abuse, there was no order to them any more. A photocopy of an entire book next to a bunch of old Christmas cards. Miscellaneous details of a historical figure next to membership lists of Sherlockian societies. And those were the parts that made sense.

Opening up a folder called "Misc Info and Cool," I found the makings of Christopher Morley masks. Why I made masks of the founder of the Baker Street Irregulars, and what we used them for, I have no idea at this point. If I had the time, I could search through scion newsletters and the actual letters themselves that fill dozens and dozens of other file folders, and try to piece together a theory of just what kind of ceremony this crude mask from some "ancient" Sherlockian cult was used for. 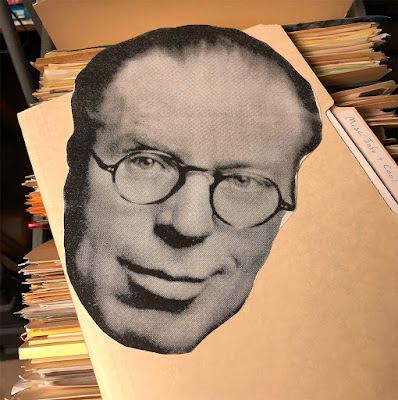 It seems like a ridiculous amount of effort, one which I will never get to, of course, but it did put one thought in my head . . . I really need to make a pass through everything in this filing cabinet, after a decade or two of just ignoring it, and see what this earlier day Sherlockian who filled these files was up to. Much of it may be weird worthless triva, like the Morley mask, or the multiple mini-posters for the Ralph Bakshi film "Wizards," which was in the same folder . . . but one never knows. The journey of a treasure hunt is often as important as the treasure, if any, that results in the end.