A Saturday soapbox for Watson and Clark Russell.

A sleepy Saturday morning with no caffeine in sight, where to turn?

Well, initial thoughts were upon CBS's Elementary, where that unimaginable sixth season is slowly winding to a close with the promise of shocking new revelations. Last year, Mr. Elementary got brain damage -- this year? A severed limb perhaps? Watson revealing herself to be Von Bork after all this time? But then, out of nowhere, Canada launched a targeted drone strike on Watsonian candor. 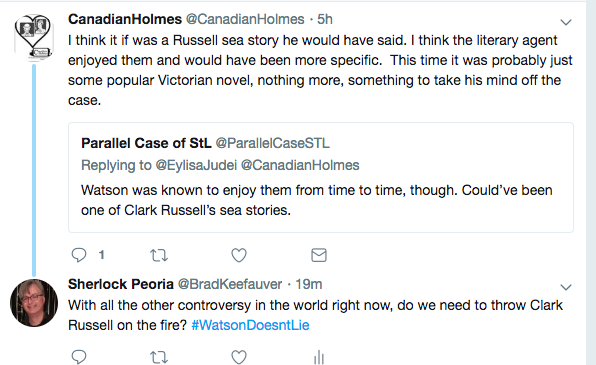 As you can see on Twitter, I was quick to respond. But Twitter, even with its expanded word limit, offers far too little space to mount a true defense of friend Watson, so I'm bringing the case to Blogger. Ahem.

Ladies, gentlemen, and other lovelies of the jury, Canada's Sherlockian journal of record, speaking upon our public social media, has leveled what I find a shocking accusation at one John H. Watson, M.D., a fine upstanding citizen of the United Kingdom. A man so stalwart and true that he might, as we all well know, but a fair and impartial jury just like yourselves.

Canadian Holmes, a publication that can be bought for the very low price of twelve dollars Canadian for a single issue, has leveled the charge against our good doctor Watson that he actually had read no books by the author Clark Russell and was simply pandering to the public with the pretense that he liked what they liked.

"I think if it was a Russell sea story he would have said," this less-than-book-length publication wrote, in the wee hours of this morning.  But Watson did say "I was deep in one of Clark Russell's fine sea stories until the howl of the gale from without seemed to blend with the text, and the splash of the rain to lengthen into the long swash of the sea waves."

Note Watson's direct reference to "the text" and his commentary on how "fine" the story was, a judgment he could never have honestly made without actually reading Clark Russell's work. Are you or I or Canadian Holmes going to state frankly that John H. Watson was a dishonest man? Nay, that "H." in the middle of his name might well have stood for "Honest," his character is so beyond reproach!

John H. Watson was a man of literature, a fact no one can deny. His writing ability connotes a reader, and a well-read reader at that, so why not Clark Russell? And as a fellow author, would not Watson be knowledgeable enough in the field of books sales to know that specifying a title, such as My Watch Below or The Romance of a Midshipman, would just promote one of Russell's book, while the phrase "one of Clark Russell's fine sea stories" promotes all of Clark Russell's work? John Watson is a kind and generous man, why should those qualities not extend to his treatment of fellow writers?

Hundreds, if not thousands of Sherlockian scholars have one or more Clark Russell novels upon their shelves thanks to Watson's recommendation in "The Five Orange Pips," and plainly, they all have believed John H. Watson over the years. This sudden and controversial claim by Canadian Holmes can plainly be seen as modern media trying to drum up attention at the cost of the good name of Watson, and I tell you, ladies, gentlemen, and other lovelies of the jury, we should not stand for such an outrageous blot on a good man's escutcheon!

"This time it was probably just some popular novel, nothing more . . ." Canadian Holmes writes, flailing its pages against a computer keyboard in some remote Beauty and the Beast enchanted Canadian castle where the animated Sherlockiana sings and dances the day away. Nothing more than a popular novel? What were Clark Russell's books if not popular novels? Chopped Christmas goose liver?

We do not even need to bring the literary agent into this conversation, as his trust in Watson was surely greater than anyone's. And by now, I am sure that such an enlightened quorum as you fine folks can see the truth of this matter and can render your verdict with a satisfied ease. I would ask that you go lightly on your sentencing of Canadian Holmes in this matter, and maybe even have the goodness to subscribe to that journal and see that it's not usually so troublingly accusatory of our friend John Watson.

As for me, well, I will rest my case here, and thank the prosecution for helping me wake up this morning.
Posted by Sherlock Peoria at 11:09 AM