The Sherlockian world is full of odd little remnants. In the digital age, they seem almost silly, the little pamphlets created for a handful of friends. The idea of publishing something in a run of 221, much less the ultra-limited 17, seems almost like the work of a publishing hermit, who doesn't really want to be read. But thanks to collectors and archives, one always had hopes that such bits might eventually reach a few more readers, in that age before the internet gave us a place to spread our words.

Early on, I remember concerns that digital works did not hold the permanence of paper. But electromagnetic pulses and fires seem equal threats, and both of those fates are far outweighed by the mild-mannered fate of simple disinterest. As much as we might love the book in theory, there are those members of that species who never get looked at again, even if they have a nice secure shelf home in the most climate-controlled of vaults.  Ah, but don't let me get to cheery here.

For the joy of any written work was never its longevity, but the moments of creation, the moments of connection, the moments of discovery, and, maybe, those moments of remembering. If I seem a bit philosophical this evening, it's due to being reminded of some of that printed residue that I've scattered in my wake over the years, a group of items produced under the banner of "Baker Street Digressions."


Not really a publishing house, but a logo I'd throw on party favors for friends, Baker Street Digressions put out small monographs, pamplets, one odd little attempt at hand-making a hardbound book, some weird translations, and even some fanfic inspired by the X-man Wolverine. (Hey, it was the 1980s. "Things were different at the time." Actually, no they weren't, we just did what we could with what we had.) The earlier half of these things were actually printed with ink down at the local PIP Printing outlet. The latter took advantage of toner copying, so those words will probably fall off the page faster at some point. But the words had to get out somehow.

Anyway, below is a photo of most of these paper remnants of my Sherlockian past, followed by a list of what I still remember. You never know what I might have forgotten over the years. 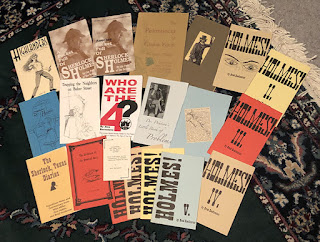 Concerning the Later Life of the Maid Agatha, with some Sidelights on the Disposition of Another Canonical Figure of Note, a mini-monograph, December 1981, limited to 50 numbered copies.

Trapping the Neighbors on Baker Street by Brad Keefauver, BSD format, May 1995.

Highlanders: The Pocket Fanzine,paperback, May 1994.

A Pocket Full of Sherlock Holmesby the Fore of the Scions, paperback, September 1996.

Another Pocket Full of Sherlock Holmes by the Fore of the Scions, paperback, September 1997.

The Weekend at Baskerville Hall book, 1999.

Who Are the 4? The Ancient Secret Society Hidden in the Pages of John H. Watson's The Sign of the Four by Alex Bernstone, 2005.

Posted by Sherlock Peoria at 6:52 AM