Sometimes, even and older fellow like me gets surprised at how far back some parts of Sherlockiana go. As long as somebody is able to reproduce type, stories of Sherlock Holmes appear in print. This afternoon I was taking a little time to sort a few things out and ran across an especially nice piece of our history. 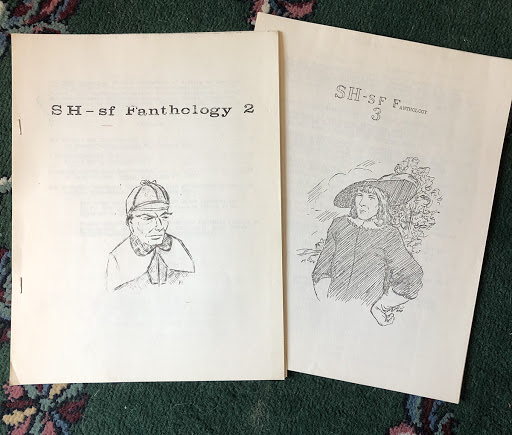 September of 1971, and a Minneapolis Sherlockian named Ruth Berman is collecting Sherlockian material from other zines, and, with permission to reprint, collecting it into her own fanzine called SH-sf Fanthology and letting folks have those collections for a mere fifty cents a copy.
"The Martian Who Hated People" by Edward Ludwig, from a 1955 publication called Inside. "A Letter (Mycroft to S.)" by Jon White, from a 1968 issue of Fistula. "Moriarty and the Binomial Theorem" by Doug Hoylman and Proper Boskonian #6, and February 1971.
The next year, she was back again with a third issue.
"The Adventure of the Second Narrator, or The Case of the Doctor Who Had No Business" by Dick Lupoff from Pok-Pik '66 Souvenir Booklet. "Annotations in Afghanistan, a discussion by members of Apa-L" by Bill Warren, Len and June Moffat, Don Fitch, Ted Johnstone, Joyce O'Dell, and Dan Goodman from seven issues of Apa-L (numbers 258-264). A limerick from a 1971 Despatch, as well as art by Mary Ellen Raboglatti. The classic "Holmes was a Vulcan or 'Mr. Holmes, where have you lived?'" by Priscilla Pollner, which first appeared in Son of a Beach's first issue in 1970. And Ruth Berman's own "Sherlock Holmes in Oz," which had already seen print in the first issue of Oziana two years earlier. 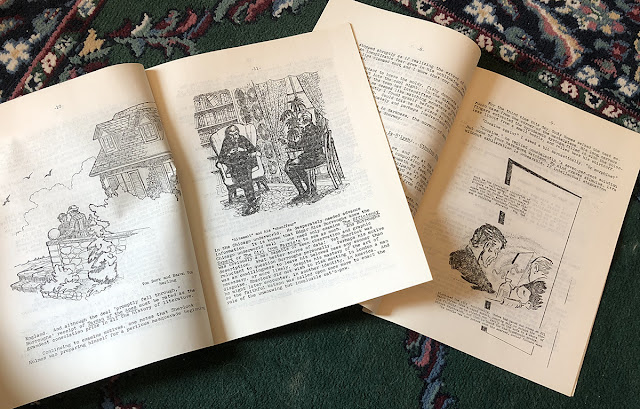 I'm not sure how they were originally reproduced, as I didn't get my copies from Ruth Berman until the mid-eighties, when photocopying on plain paper was more common than in 1972. I know a lot of fanzine creators paid the high price for offset printing of their typewritten works back in the day. Things were a wee bit different almost fifty years ago. But, like I said at the start, people got their Sherlock-works out there any way they could.

Science fiction fans have always loved Sherlock Holmes, I think, and that's one reason he could be seen creeping into fanzines before he ever had his own (unless you want to count The Baker Street Journal as a very high quality fanzine when it first came out, and a case could be made). And one can see both genders represented from early, early on, despite the "old boys club" feel some Sherlockian history gets, despite women like Dorothy Sayers being right in there with the best of them.

It's good to get a glimpse of what came before now and then, just to remember that the current version of the Sherlockian world didn't invent crossovers or fan art. (Though, man, is it at a whole 'nother level now!) And get reminded that Sherlock Holmes as a Vulcan has been a thought that's been with us for half a century as of this year. Half a century!

(And by the by, anybody ever ask Nic Meyer if, when Spock quoted his ancestor and comes out with a Holmes line in Star Trek VI: The Undiscovered Country, was Spock quoting a human ancestor or a Vulcan ancestor? Mr. Spock had both, so the question was kind of left unanswered.)

Hold on to things, kids. Fifty years from now, somebody's going to need material to tell the other Sherlockians about, and it might just be you.

And one other thing. All of these goodies got distributed by the United States Postal Service. A service provided to everyone by the country in which we live for the completely reasonable cost of a few stamps. Not a goddamned business with profit motives governing choices. A public service like fire departments and libraries and the National Guard. Sorry for the sudden dark turn at the end, folks, but some bad shit is going down out there and we can't stick our heads in the sand. It's gonna get a lot uglier before it gets better, you gotta know that on this mid-August day of 2020.

Posted by Sherlock Peoria at 4:53 PM