Tonight some local Sherlockian friends and I did a little viewing of a couple of old black and white Holmes productions (via Zoom) of course, the most fascinating of which was a little number from the  1949  TV series Your Show Time. It was the first TV series ever to win an Emmy, and it adapted many a short story by many a famous author. The host, called simply "the Bookman," was supposedly a little bookshop owner who not only introduced the tale, but would also occasionally jump in during the story to build suspense, a bit like Professor Everett Von Scott in The Rocky Horror Picture Show. Since the show was sponsored by Lucky Strike cigarettes, he smoked like a chimney, and his teeth were definitely from a time before bright, well-ordered smiles were de rigueur for television.

The story presented was "The Speckled Band," and the first thing one notices is the star -- Alan Napier, the Alfred from 1960s Batman as Sherlock Holmes. But did you ever notice the other appearance from that same future Batman series? It's Shakespeare! 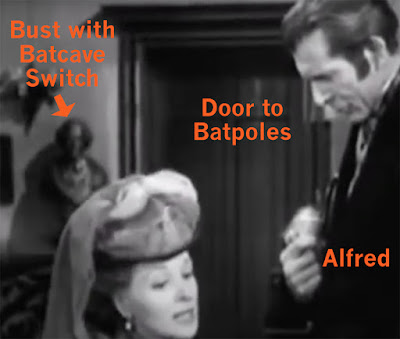 In fact, the positioning of the bust of Shakespeare in 221B Baker Street is very close to where it was positioned in stately Wayne Manor in the latter show.
Helen Stoner is played by classic horror movie Evelyn Akers, who also played opposite Basil Rathbone's Holmes in Sherlock Holmes and the Voice of Terror, and we get to see her sister "Jean" Stoner die in a flashback uttering "The speckled band!" as she dies, as all Stoner sisters must. I say this, because Helen's sister was named "Violet" in a 1931 adaptation, and "Julia" in the original story. So Helen, Jean, Violet, and Julia were quite the snakebit "Little Women" of Stoke Moran.
Grimesby Roylott in this version is a bit problematic -- with a six foot six inch Sherlock to threaten, actor Edgar Barrier (also in Sherlock Holmes and the Voice of Terror) comes off a bit puny, and when he bends the fireplace poker using his knee, it doesn't seem like Sherlock is going to have any problem bending it back (using his knee). Watson, who looks like Einstein with shorter hair, can't bend the poker at all by simply waving it in the air (and not using his knee).
But that isn't Watson's biggest problem in this one -- he's constantly attacked by the Stoke Moran monkey, who seems to be thrown at him at every opportunity by someone off camera. Even when they're climbing in the window at night, Holmes gets in easily enough, but Watson comes in fighting off the monkey. The little monkey even makes for Holmes to say his classic line when Watson finally asks "Why does this monkey keep attacking me?" The reply: "Elementary, my dear Watson! Romance."

Old adaptations are probably most delightful in the weird little choices mad in changing the story, and there's a whole subplot with Helen's fiance John Armitage that gets ridiculously out of hand, and why he doesn't have Holmes and Watson arrested when it's all over, I'll never know.

But it made for a pleasant evening. (Somehow we squeeze two twenty-something minute films into two and a half hours of conversation.)

Posted by Sherlock Peoria at 11:03 PM