Erratum Moriartium, or yet another rise and fall 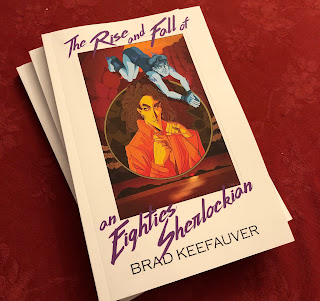 So, at the beginning of 2020 I was doing a little cleaning, looking at the filed of letters and other tidbits from my Sherlockian past, and thought, "I should gather all this info and do a book on the Sherlockian eighties." The pandemic hit, time at home became the standard lifestyle, and it seemed like the time was right, especially with the occasional mandatory furlough week from work during the roughest spots.
I sorted all the paper ephemera into ten piles by year, 1980 to 1989, and as I did, realized that the 1980s was such a decade of Sherlockian amazement that my resources, while hefty, could not fully do justice to a full history of that decade and Sherlock Holmes. There was so much that happened in that decade that I didn't come close to getting the full story of, nor know proper details of. But I had my story, and curiously enough, my story from 1980 to 1989 had an arc. A rise and fall, if you will. Maybe not A Star is Born level, where I walk into the sea at the end, but a definite journey through the best and worst of Sherlockian fandom.
So I wrote it, got a couple of great beta readers in Paul Thomas Miller and Rob Nunn, commissioned some nice cover art from Chris Aarnes Bakkane (who does such great seventies Holmes and Watson art), and then ran it by the good Carter, who did as much caretaking of the work as I would allow her time and agreeableness to do. There was just one little last detail . . . since I was mentioning all of the aforementioned people in the acknowledgements, I didn't let any of them read it. And it was in those heightened excitement last moment of putting the book together that I apparently didn't read those acknowledgements as closely either.
And Moriarty appeared. Literally.
And extra "Moriarty" in the acknowledgements that makes no sense at all, which, when the new book arrived and I let the good Carter read with all pride and joy, she saw immediately. One more rise and fall.
Appropriate, somehow, and I can live with it. If nothing else, the Sherlockian eighties taught me that I'm far from perfect, and that's the way life goes. So, anyway, I have this new book, and you can read it if you want. Still not sure I want to let all that decade of my life out there, but too late now!
Find it at https://www.amazon.com/dp/B08VCKZBFF .  I promise not to go on and on about it,
Posted by Sherlock Peoria at 5:47 PM