I was finishing out an article on Dr. Watson's Paddington days tonight, when a find that's definitely worthy of another article popped up as I read through the 1937 An Encyclopaedia of London, edited by William Kent. 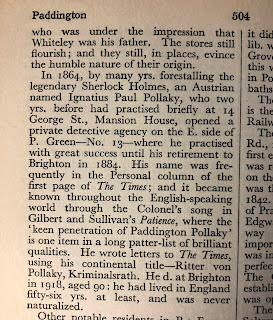 When you're writing on Watson, and the book that's nominally not about Sherlock Holmes mentions Sherlock Holmes, alarm bells go off. And when you find that there was a private detective who lived less than a mile from 221B Baker Street who retired to Brighton in 1884 at the tender age of 56, well, those alarm bells turn into bellowing foghorns.

"Paddington" Pollaky, known as "Ritter Von Pollaky, Kriminalsrath" on the Continent, was apparently a very popular private detective, even celebrated in song by Gilbert and Sullivan because he was just that well known. "His name was frequently in the Personal column of the first page of The Times." The guy was apparently doing quite well for himself. The 1937 article on Paddington where I first encountered him said he retired in 1884, but Wikipedia says he closed his Paddington office in 1882 and gave up private investigation forever.

Sure, he was only 56, but that is definitely an age where one feels one's self slowing down, especially if there is some bright young thing nearby operating at a much higher speed. (Am I speaking from experience here? Yes, I am.) And given the year was 1882, we all know who started doing business less than a mile away from Pollaky's office at number 13 Paddington Green just the year before: a very bright young thing named Sherlock Holmes.

Never had a man a better reason to take his life's savings and retire to the beach, I think. It would be fascinating to explore Pollaky's doings circa 1880 to see if he might have encountered, or even been approached by an aspiring student of detective. Or was Pollaky just the bar that Sherlock Holmes set to raise himself above?

But I've got too many other things cooking to follow that trail at the moment. If you decide to take it up, let me know what you find . . . or if some earlier enterprising Sherlockian has followed it already. Because it certainly seems a trail too good not to follow.

Posted by Sherlock Peoria at 9:09 PM