The odd fish pulled from the Sherlockian book pond

Today was quite a throwback to both earlier days and one of those dreams you have of finding a little bookshop with all those things you wish your local bookshop just happened to have. Apparently word on the street (some Sherlockian street) that a little shop in Verdin, Illinois had gotten a Sherlockian collector's books at some point in the past year or so and was worth a visit.  Since Verdin is somewhere between Rob Nunn's city and mine, Rob invited me to meet and shop and have lunch.

Unfortunately for Rob, "Books on the Square" has two locations, the Verdin one and one a half hour north in Springfield,  and computer navigation can be a fickle mistress, so while I arrived at the shop at the appointed time, Rob found himself a half hour away. And while I am a good and patient soul, standing on the town square in Virden, Illinois for a half an hour with the only thing of interest in site being the one bookshop we were going to look at . . . well, I went on in without him.

When the clerk asked, "Looking for anything in particular?" however, I replied, "Not really," just to give Rob a fair to get there before I found anything of Sherlockian import. I had already discovered another building the owners had with a one dollar book sale, but exploring that past the edges of the dollar books, I found an amazing selection of E.W. Hornung "Raffles" books and a nice looking biography of Henry Ward Beecher, so I did give him a little time. But as Twitter followers have seen, I still discovered the cache of Sherlock long before he got there. And it was, indeed, a good one.

There were a lot of things one just does not expect to see in an Illinois town of 3,514 people. Not just the recent manuscript reproduction series by the BSI, but the British and French reproductions from earlier days. The Adventure of the Shoscombe Abbey was definitely one I hadn't see before. All of the red-backed BSI history series stood attentively in line. Conan Doyle biographies that weren't on my shelf of Conan Doyle biographies, and that sucker is a few feet of them. It was one of those shopping experiences where you knew your budget was definitely going to run out before your desires ran out. (Thanks to the internet, you definitely don't get the bargains you got in 1985 when even serious dealers didn't always know what they had.)

So what did I buy?

Well, at this point, I've got almost all of the mainstream stuff I really want, and I'm not really a completist collector, going for function over numbers. But when the price is right, I'll still go for something that's just strange, and that's where a couple of my purchases went. First, Ira Bernard Dworkin. 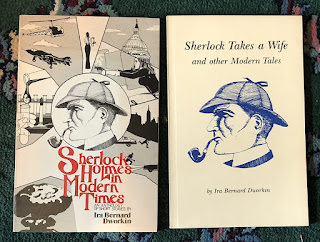 I have sung the praises of Sherlock Holmes in Modern Times on this blog before. It is some remarkably weird and wonderful fanfic, if you're of the mind to enjoy the Plan Nine from Outer Space of Sherlockian pastiche. Finding that Dworkin had a second book -- Sherlock Takes a Wife and other Modern Tales, well, picking that up was a no brainer. I didn't even open it to see what treasures it held until I got home. What treasures were those?
Well, other than "Sherlock Holmes Takes a Wife," the nine-chapter, fourteen page "novelette" at the start of the book, the contents were the same as the earlier volume. But did I regret buying a book with the dedication "To the millions of admirers of the greatest private detective in all fiction, who had waited over 100 years to see him get married: WAIT NO MORE!!!" -- well, how could I?
So, I know the millions of you who couldn't get your hands on this 1994 volume want to know just who Sherlock Holmes married, so I will spoil that part: At a wedding performed jointly by the Archbishop of Canterbury and the Anglican Bishop of South Africa, attended by Queen Elizabeth and Prince Philip, Sherlock Holmes marries Miss Wynona Mogambo, member of Parliament and barrister-at-law.
As Sherlock Holmes puts it, "Even Irene Adler, who out-smarted me in the Scandal in Bohemia, can't compare to her. After all, I'm only 45 years old, and not completely immune to gorgeous femininity when I see it -- and I've seen her. I never dreamed I could see such a combination of beauty and brain . . ."
Well, sorry, Mary Russell. Me, though, not at all sorry for that purchase.
But here's the real weirdie of the trip . . . 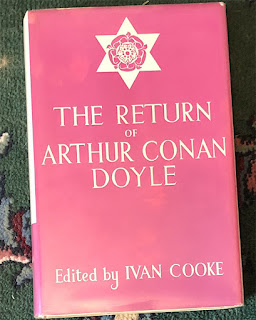 This is one of those books that is kind of baffling just to figure out the author's intent on a light perusal. It seems that Conan Doyle wrote a book from beyond the grave titled Thy Kingdom Come that was too big to be reprinted during World War II.  "Since the demand for the book has remained constant and unsatisfied, it has now been re-published, re-written, and revised throughout." Huh? Conan Doyle's ghost okay with that, I wonder?
Weird enough for you . . . just wait!  It's autographed! 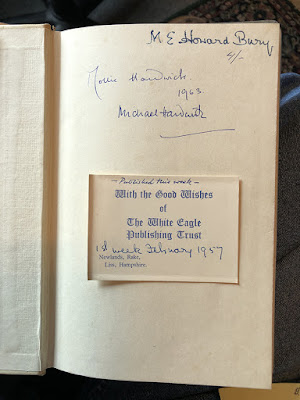 For some reason, this volume seems to be autographed by, not "editor" Ivan Cooke," but by Michael and Mollie Hardwick, the authors of The Sherlock Holmes Companion among other Sherlockian items, in 1963, six years after it was published. Why did M.E. Howard Bury, if that was the book's owner, have the pair sign this book at a time when they should have been signing their 1962 Companion? Did he have that one at home, and was just buying this one the day they were in the store?
The book is one of those lovely things whose owner left pieces of their life inside as well -- a note listing all of the gifts in "Twelve Days of Christmas," a pamphlet from The True Healing Series, No. 3 entitled "Loneliness and its Cure" with the handwritten note "Excellent series." And some inked-in corrections for mispellings or typos in the ghost author's work.
These are the sorts of finds I miss hitting old bookstores to encounter. You can always find the popular items if you're willing to pay the price. But these curious little items you might have only heard rumors of, with strange little stories of their own to wonder about -- they're the real bargains in the bookstores.
As we checked out, the clerk remembered that when I came in and was asked "How are you?" I had replied, "Hungrier than I should be for this time of day," and offered restaurant suggestions. The choice pick had to be Showtime Lanes, the bowling alley that I thought was a strip club when I had originally driven into town. It turned out to be one of those lovely local diners with a refrigerated display of pie selections (I went for cocoanut creme, Rob for cherry) and a really good tenderloin. (That's a deep fried pork sandwich, for you non-Midwestern heathens out there. Don't make me explain Rob's "horseshoe.") Rob and I chatted away for a goodly couple hours, not long enough for the old Christopher Morley "three hours for lunch" standard, but long enough to feel a little guilty for occupying table space and the staff's attention.
It was quite a fine Sherlockian Wednesday, and a nice end-of-summer vacation day from work. 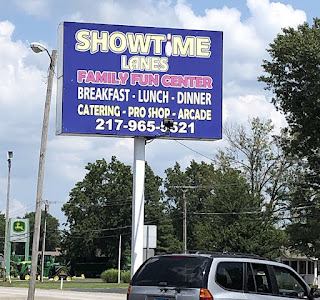 Posted by Sherlock Peoria at 8:06 PM