Our Sherlock Holmes Story Society met again this week, both at the Peoria Public Library in masks (five of us) and on Zoom (six of us) to discuss "The Veiled Lodger" this evening. And though the thin nature of Holmes and Watson's part in the tale had many wondering if Conan Doyle was losing his touch, the discussion, as always, inspired me to wonder.

Wonderment A: Eugenia Ronder was a woman virtually enslaved by a pig of a man since she was apparently assaulted by him as a teenager, then forced to wed for legitimacy, completely in his control her entire life. And yet, when he is killed and she is incapacitated on that very night, her fortunes are somehow held intact for "many a weary month" while she recovers from near death. In the male-dominated Victorian era, how did this poor victim manage to hold on to the fortunes her husband built up when she barely had control enough to keep breathing? With immoral cowards like the pretty boy Leonardo heading for the hills with whatever they could grab, how was she not left penniless on a roadside en route to Wimbledon?

Wonderment B: What was Watson's problem in writing this story? A man who is normally kind to and fond of the ladies he encounters describes a nice, motherly landlady thus: "Our visitor had no sooner waddled out of the room -- no other verb can describe Mrs. Merrilow's method of progression . . ." Mrs. Merrilow, a woman Watson surely knew would one day read the tale, "waddled?" I could hardly believe our good doctor would be so unkind!

Wonderment C: Given my chronological bent, I had to consider Mrs. Ronder's timeline.  "On this particular night, seven years ago," Sherlock Holmes says when telling of the lion attack upon the lady. And earlier Holmes says to Mrs. Merrilow, "You say that Mrs. Ronder has been your lodger for seven years and that you have only once seen her face." Wait a minute -- if Mrs. Ronder was attacked seven years ago this very night, how did she show up at Mrs. Ronder's boarding house with a veil and a bunch of "hard cash" at the same time, when we know she was barely alive and recovering for months?

Wonderment D: In addition to this being Sherlock Holmes Story Society night, the founders of the Bovestrians of Ragged Shaw, the Sherlockian society dedicated to cryptozoology in the Canon, were also in communication regarding their trading cards for this tale.

Put A + B + C + D together with one more line from the story and all becomes clear. That line?

"He might as soon have loved one of the freaks whom we carried round the country as the thing which the lion had left," Eugenia Ronder says of her disfigurement. (Can you hear the quiet chanting yet? "One of us . . . one of us . . . one of us . . .") In addition to a lion, a strongman, and a clown, Ronder's Wild Beast Show had freaks. And when all hope was lost and all turned their backs on the mutilated woman the lion left for dead, who took Eugenia in? Who stealthily gathered up Ronder's fortunes and used the money to buy a home for themselves and their fellows, including the remains of their former leader's wife?

We are told what a pig-face Ronder had, what a beast of a man he was, like something out a freak show himself. And if Ronder's Wild Beast Show had a pig-man, is it so unlikely that their "freaks" also included a woman with webbed feet like a duck? A woman who cared for Eugenia Ronder from the very moment she was so devastatingly wounded?

It was said by an ancient Sherlockian sage named Professor Pope Hill Sr. that every story in the Canon held a secret second tale beneath it, and it would appear that Mrs. Merrilow's story is one of those. So here's to "Ducky" Merrilow and her tender care of perhaps the most ill-treated woman Holmes ever met. 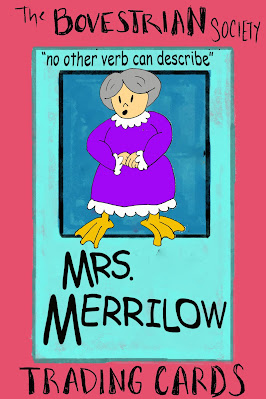 Posted by Sherlock Peoria at 9:38 PM