It has been many a month, but Talon King and Paul Thomas Miller have informed me that they're having another meeting of the Sherlock Holmes Realist Society to study the original Watson documentary footage of "The Case of the French Interpreter" this Sunday.

It's actually a recording of their podcast Sherlock Holmes Is Real, and I'm a bit suspect of how societal this "Sherlock Holmes Realist Society" is and not just a ruse for drawing in guests or an audience for their recordings. But I guess one could investigate that -- personally, I will be otherwise engaged.

Their firm belief that John H. Watson was a pioneering documentary film maker, and that the videos found on YouTube disguised as a 1950s TV series are a true audio-visual record of Holmes and Watson's time together always challenges what we know from Watson's later, written version of things. And this week's discussion should be a big one, questioning the very existence of Sherlock Holmes's brother Mycroft, among other things that were not exactly as we thought they were.

It has been said that Sherlock Holmes Is Real and the Sherlock Holmes Realist Society is that very old Sherlockian game being played at another level. It has also been said that this might be the most delusionally silly corner of our entire Sherlockian hobby. (Though I can't imagine what dastard would even repeat such a slander . . . oh, wait . . . I guess I just did. Unless I just made it up now, and then I wouldn't be repeating it.) Anyway, they seem to believe the whole documentary footage thing, and if you are willing to encourage or at least quietly tolerate such behaviour, you are welcome to join the podcast recording this Sunday on Zoom.

The invitation runs as follows:

Register in advance for this podcast recording and meeting:

After registering, you will receive a confirmation email containing information about joining the meeting.

And if you do, good luck to all involved! 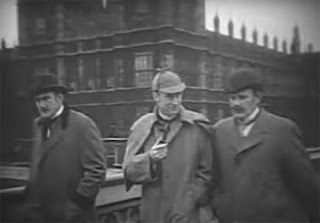 Posted by Sherlock Peoria at 10:23 PM