"I suppose that you will admit that the action is morally justifiable, though technically criminal," Sherlock Holmes stated amid his efforts to persuade Watson into burglary. The pair were actually venturing out for a jail-able offense in burgling Charles Augustus Milverton's house, crime not being their normal way of doing things. And like our heroes, Sherlockians are not -- in the main -- often criminals in the pursuit of our hobby. And there are, of course, those gray areas.

While we've had more than a few daylight publishing enterprises in the Sherlockian world, there have also been a few that operated in shadow. Before the Mysterious Press or Magico Magazine reprinted the rare classics of our field, parties who might be forgotten in our history were supplying friends and friends of friends with a different sort of reprint . . . the photocopy. 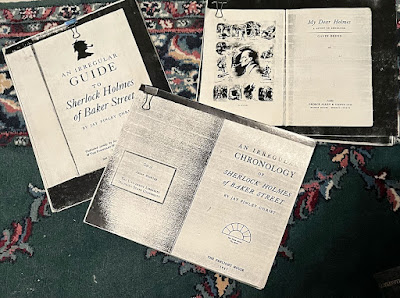 As soon as a Sherlockian with access to a copier and a hard-to-find work paired up, private reader's copies began to appear in the private traffic between members of our little cult. I have a few such pieces in my collection, done on that slick shiny paper that came in rolls like those now long-outdated fax machines would later use. As you can see in the photo above, one such copy was made from a copy of a book a fellow named James Stokely donated to the Michigan State University. And I would wager someone used a school copier to make that copy. I know I took a lot of my favorite books at the ISU library down to the coin-operated copier to save passages or illustrations that meant a lot to me.
These were around thirty year old, or so, books at the time -- not something that yet seemed so rare a collectable that their owners were always worried about damaging the book by repeatedly pressing it against the copy glass. But it was still an effort -- and sometimes a costly effort -- that many a Sherlockian did not seem to mind making for their friends. And that spirit is still with us. Digital imagery can now be sent in an email, or other ways, to provide distant friends with the ability to look at pages from something in our library. And who knows where folks might be quietly passing PDFs of officially created stuff like the The Baker Street Journal archives, originally placed on CD-Rom, between friends. The technology changes, but the impulse remains the same.
I don't know that photostatic copies of books made with machines that don't exist any more will ever become collectable in their own right -- created as they were just to pass information that could no otherwise be had. But I kind of treasure these relics of a bygone era, and the black market of Sherlockian love they represent.

Posted by Sherlock Peoria at 8:30 PM