A seriously hairy topic for debate!

There, I said it. I don't care if it destroys what little credibility and reputation I have via this blog. I don't care if my site's daily hits dwindle down to my mother and my stalker. I just have to say it as I see it: Kristina Manente's definitive ranking of Watsonian moustaches is just wrong.

Yes, I know, there are those who will say I'm only going against the goddess of internet Sherlockiana because she went blonde and her powers might seem weaker with that shade, but I say thee nay! Others might say that the lack of new Elementary episodes to therapeutically work out my issues on has left me with brain fever, but again, I say thee nay!

Jude Law's moustache is kinda patchy on top, and without Jude Law underneath it, would not fare well at all. And that two-piece peach fuzz on Gareth David-Lloyd's face? The Secret Society for the Perpetuation of the Young and British seems to have bribed Ms. Manente to get their poster-boys bookending the list. Who should have been topping that list?

Take a look at this moustache! 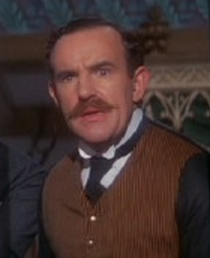 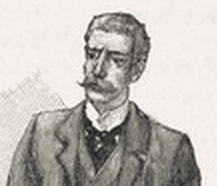 Sidney Paget Watson! The first and greatest of Watsons, and JUST LOOK AT THAT MOUSTACHE! It eclipses and predominates the whole of his face, the way a perfect moustache should. Sure, being a piece of art gives him an unfair advantage over Colin Blakely, which is why I'd only give him the number two spot. But, wow. Just wow.

Now, Kristina has a lot of good candidates in her list. I would keep them all . . . except maybe that Asylum guy in last place . . . and make it a top ten Watson moustache list. And coming in at number ten, in place of her personal favorite shlocky Watson with bad facial hair, I would add one more contender to the list.

He lives in my house, what can I say? 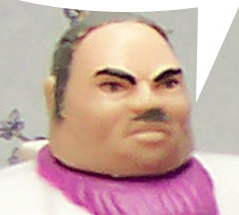 It's good old Action Sherlock Brain Theater Watson! Sure, his moustache was a teeny-tiny piece of duck tape, but the lip-carpet matched the drapes in his case, and he wouldn't want to be mistaken for a certain kingpin of crime.

Not being a wearer of the Watsonian moustachio myself, I will not claim to be the last word on the subject. And I'm sure many an admirer of the male form and feature has studied this matter longer then either I or the ever-so-young-in-moustache-studying-years Kristina. So I will bow to greater authorities when the time comes. But for now?

C'mon, Colin Blakely is just the man! And stable-boy Joe Barnes from the Brett series hasn't quite grown into a moustache so manly that ballet dancers of both genders flock to it like butterflies to honey . . . .
Posted by Sherlock Peoria at 10:06 PM