A good friend of mine was talking about the principles of flag design the other night, and my first thought, in meeting those basic tenets with a flag to call my own was to borrow the symbology of a hero of mine since childhood . . . who wasn't Sherlock Holmes.

When it comes to effective, yet simple, flag-type devices, no one claims a kid's allegiance more than a superhero, and my favorite, then and now, was Kid Flash. His red lightning bolt on a field of yellow is a marvelous thing to me, suitable for flag or t-shirt. Most of the early superheroes came with such flag-worthy, iconic symbols: the red "S," the bat, the lantern. They were meant to be recognizable in an instant, as a flag is supposed to do. You see the skull and crossbones, you shout "Pirate!"

So if Sherlockians were suddenly to form an army, raise their own castle, what flag would we fly?

Well, for one, we should start with the principles laid out by the North American Vexillogical Association.

Principle #1: "Keep It Simple: the flag should be so simple that a child can draw it from memory."

Principle #2: "Use Meaningful Symbolism: the flag's images, colors, or patterns should relate to what it symbolizes."

Principle #3: "Use Two To Three Basic Colors. No more than three colors that contrast well and come from the standard color set."

Principle #4: "No Lettering or Seas: never use writing of any kind or an organizational seal."

Principle #5: "Be Distinctive or Be Related: avoid duplicating other flags, but use similarities to show connections."

Okay, I know from the get-go that someone out there is going to shout, "Deerstalker and calabash pipe! Deerstalker and calabash pipe!" And why not? Those icons have served Sherlockians since the time of William Gillette, whose one Sherlock Holmes adventure will finally be seen by the modern world this fall. But that deerstalker has been an "iffy" proposition for most of the last hundred years. Sherlocks take it or leave it, and in the modern day, they mostly leave it. And despite our remaining tobacco-lovers' natural desire to have Holmes as a patron saint, that pipe is definitely not symbolic of "eternal Sherlock" either. So out go the dated references.

A loyal Baker Street Irregular will also probably suggest purple, mouse-gray, and/or blue as colors for the flag, as they have long held those colors as their standard. But those were the colors of Sherlock's various dressing gowns, and as much as an old-school Irregular might want to pooh-pooh Watson's tighty reddies in fangirl art as born of lustful intentions, what was with all the focus on Sherlock Holmes in his bathrobe? (Yes, I know a dressing gown isn't just a bathrobe, but still a "Does he have anything on under there?" mystery outfit.) Makes you wonder about the old boys a bit, doesn't it? (Nudge, nudge, wink, wink.)

No, to start working on a Sherlock Holmes flag, I think we have to go old school, and I mean seriously old school. As in the City of London flag. Sherlock Holmes was a man of his city as much as anyone, and the red St. George's cross with a sword upraised in the upper left quadrant is an inspiration as to where one could go with his knightly side (had he not turned down that knighthood, perhaps we could have hit it more directly). 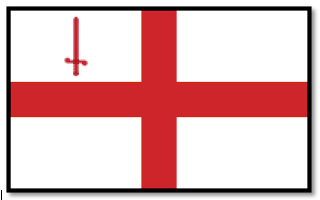 The big problem in taking anything from that one other than inspiration is that Holmes didn't really live nor work in the City of London proper, but in Greater London. So one can also look to the flag of the former county of Middlesex, or the flags that fly over Westminster Abbey, or even the flag of that county Sherlock Holmes would eventually retire to: Sussex.

The image of the six small birds in the Sussex flag (martlets) brings quickly to mind the imagery Watson used to describe Sherlock Holmes on occasion, calling his features "hawk-like." As Holmes himself spoke of "my natural prey," it is not hard to envision him as an keen hawk-eyed raptor catching his prey in a sudden swoop down from the intellectual heights.

In that bird's claws could be two or three small black birds, representing Moriarty, Moran, and/or Milverton. Or one could get fancy and make his prey a spider for Moriarty and a snake for Milverton (with a speckled band nod thrown in), but I think the spider just isn't elegant enough for a flag.

It is said that a blue flag symbolizes "vigilance, truth, loyalty, perseverance, and justice," so that background seems a natural. Making the bird of prey gold is a nice nod to Sussex.

But that's just one idea, and the black birds he's catching probably won't pop against a blue background. And bird-wise, Holmes could also be a phoenix, rising from, not fire, but the waters of Reichenbach. Is either of the bird ideas so simple a child could draw it from memory? Done right, perhaps. Flags are tricky things.

We know Dr. Mortimer found Holmes's very skull worth coveting, so would a big old skull suit a Sherlockian flag? A pair of all-seeing eyes like some fortune-teller's sign? A bloodied demon-hound lying beaten in the beams of the light of truth?

These days the pattern on the living room wallpaper from BBC Sherlock's 221B Baker Street is quickly becoming the banner of at least one segment of our Sherlockian community. But it would be nice if we had a standard for all Sherlocks these days, to unite us as a people. (Yes, yes, a bit bold of a statement for the guy who disses Elementary all the time, but still . . . .)

Any clever design folk out there willing to be our Betsy Ross and release something beautiful into the public domain for all of Sherlockiana? The flag pole is open!

Posted by Sherlock Peoria at 8:54 PM