At some point, we're all time travellers.

For the past thirteen-point-five years, I've been blogging about Sherlock Holmes. During that time, we've seen some dramatic changes in Holmes fandom, one of which being that we can actually refer to ourselves as a fandom now. (Well, some of us can. The word still gets stuck on the tongue of a few of our elders, like sitcom characters who just can't bring themselves to pronounce that thing they're in denial of.) This is a different age than the Sherlockian world of the 1980s, a statement I make far too much, as repeating one's self is one of those traits that comes with age.

Another trait that comes with age is the feeling that there's another you existing in the past, whom you occasionally find artifacts from. @plexippa on Twitter tweeted one such artifact last night: 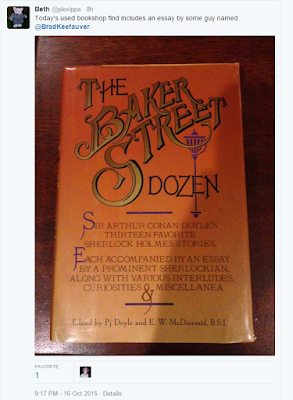 The Baker Street Dozen, edited by Pj Doyle and E. W. McDiarmid, was a collection of thirteen of the original Sherlock Holmes tales, each accompanied by an essay from "a prominent Sherlockian." I got in in because Pj Doyle was a good friend and had asked me to come up with an essay they could use as an example in their proposal to sell the idea to a publisher. Or at least that's what I thought -- when my "example" wound up in print on the shelf in Walden Books, I wished I had done something better.

But here's the thing: I've always been a blogger of sorts, tossing words out into the ether for free to relax from my day job. Having an essay in a book that wound up on the remainder table at a chain bookstore at the mall was not something I made any sort of career of, It only happened that once. And now, at a distance of going-on thirty years, it seems a little like finding one of my blog-posts done in cave-paintings at an archeological dig.

What's weirder still is how I remember as a young Sherlockian being a bit jealous of those writers who got their names in the annals of Sherlockiana thirty years before me simply because they were alive thirty years before me. Sure, there have always been some Sherlockian writers who stand head-and-shoulders above the crowd, but most of us are just being who we are when we are. And now, somewhere in a future I could never have imagined, a guy with my name has an essay in an old book with "prominent Sherlockians" in it. So what's the lesson in all that?

We're all time travelers, affecting the future with what we do today. And if you're lucky enough to make it far enough ahead on your timeline, you might look back and see yourself.