Every now and then my Saturday housecleaning gets stopped dead in its tracks by something I didn't know I owned. After over forty years of gathering up random items associated with Sherlock Holmes, it's not surprising I don't have intimate knowledge of all of them, as sometimes a great haul might have me focussing upon a particular item and ignoring some of the less-flashy ones . . . for decades, apparently.

Today I found myself entranced by a little brown book entitled The Technique of the Mystery Story from 1913. 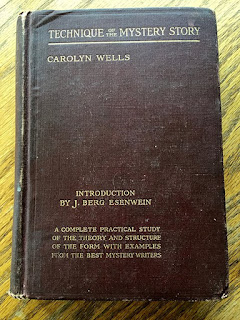 Let me say that again: 1913. Conan Doyle was still a full seventeen years from the grave. The Sacred Sixty was thirteen or fourteen tales shy of complete. "The Dying Detective" was brand-spanking new.

And Carolyn Wells, author of Technique of the Myster Story, writing for The Writer's Library series of The Home Correspondence School of Springfield, Massachusetts, was using Sherlock Holmes's cases as some of her prime examples for writing mysteries. The book cost $1.50 (or $1.62 "by mail") and in introducing the work, J. Berg Esenwein writes of the author, "In suggesting the subject to Miss Wells, I felt that no other American writer and probably no other author living was so well equipped to do such a piece of work -- a distinct popular and technical service to letters." (Conan Doyle was still alive, but maybe not "equipped.") As Wells was one of those Asimovian spigots of the printed word, turning out over 170 books in her lifetime, I suppose he was correct.

What does Miss Wells have to say about the Doylean advances in the mystery story?

Well, in a segment entitled "The Heroine and the Element of Romance," she advises "The true economy of the Detective Story forbids the introduction of romance . . ." and then uses the first paragraph of "A Scandal in Bohemia" to help make her point -- Sherlock Holmes would have gotten along nicely with Miss Wells and probably pointed Watson to her example, were he not off fighting the first World War by then. (Yes, even Sherlock was still alive when this book came out!)

Another choice bit from elsewhere in the book . . . .

"Conan Doyle employs this hitherto unknown criminal frequently. Usually he is some old man who had known and quarreled with his old friend, the victim, many years before. . . . But Conan Doyle's motive is the exploitation of the powers of his Transcendent Detective in discovering the unheard-of criminal, and so in his case the end justifies the means. But ordinarily, and especially in a book, it is bad workmanship to absent the criminal from the scene until the last."

In other words, Doyle gets a pass on some things, because . . . Sherlock Holmes.

Wells refers to many another "recent detective of fiction" besides Holmes. Names like Luther Trant, Craig Kennedy, Average Jones, Scientific Sprague, and Ledroit Connors pop up, most of which I've never heard of, despite their memorable qualities. And they get their references, too, but none so much as Holmes.

"Watson is doubtless fulsome, but like begets like, and the Reading Public, quick to take the cue, are also fulsome in praise of Sherlock Holmes." (Fulsome, to save some a Google search, is "Complimentary or flattering to an excessive degree." Apparently Wells thinks we would not accord Holmes such high honors without Watson, but it seems like Holmes himself was who first talked about how great he was.) 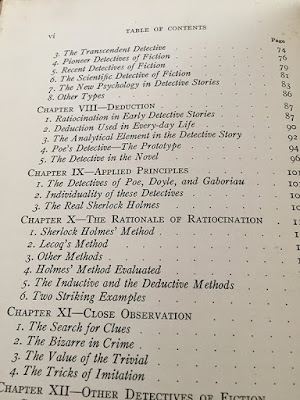 Curiously, Miss Wells's course on mystery fiction has a whole section on "The Real Sherlock Holmes" and writes of Doyle's teacher Joe Bell. She doesn't come out and outright suggest that mystery writers go out and find a Bell to inspire them, but one wonders.

At the end of that chapter, she also writes of the stir caused by Reichenbach: "But Holmes's death, instead of being welcomed, roused indignant protest. One lady wrote a letter to the author which began 'You beast.'" (Which makes one wonder if she might have heard anything about the black armband business, since it wasn't much more than a decade before.)

I'm looking forward to delving deeper into Technique of the Mystery Story: A Complete Practical Study of the Theory and Structure of the Form with Examples from the Best Mystery Writers, as it is a pretty decent read, even now. And a little inspiring.

Perhaps one of these days, then, perhaps I will be able to write a mystery story up to the technical standards of 1913 . . . which, actually, wasn't too bad a time.

P.S. Turns out the whole book in online thanks to Project Gutenberg, if you'd like to explore it.
Posted by Sherlock Peoria at 8:54 PM