The beauty of hard things.

Last night I was writing about how collectors may not be the dominant force in our Sherlockian future due to the internet, but how I was also sure that they would still be among us. The rare treasures of our shared past make collecting a fascinating occupation for those with the means, and just because we have the "easy button" of the web doesn't mean that there won't be those who, even now, chose to do things the hard way . . . which is where some of the best collectables come from.

I thought of this tonight as I pulled a random book down from myself, landing upon Client's Case-Notes edited by Brian R. MacDonald. 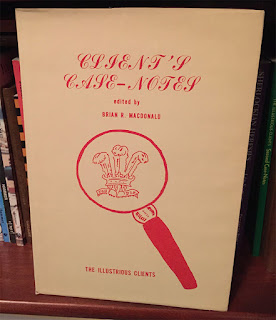 Published in 1983, the first thing you'll notice about it is the dust-jacket is actually glued together from two sheets of paper. And opening it up, you'll notice something else. 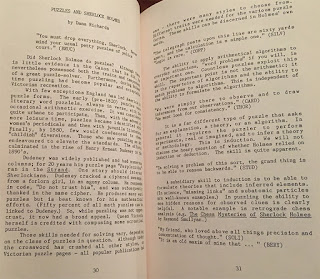 Somebody typeset this book on a typewriter and justified the margins! (I used a picture of Dana Richards's article, as he was one of those lovely regulars who graced The Holmes & Watson Report with regular content back in my print era.) And the mere fact that it's a hardbound book means someone spend some money on the binding of its 125 copy run.

Every detail of this book cries out "Somebody really wanted to publish a book!" to the knowing eye. Such things did not come easy back in 1983, before such modern miracles as household typesetting a child can do and  48 Hour Books. And despite the crass commercialization of the collectable market with chase items and "limited" runs designed to hit just the right price-point that we see these days, I think the best collectables will still come from a place of the heart.

Hand-binding, papercraft, and calligraphy still exist, and Sherlockians who will produce a run of  17 copies, 221 copies, or something in between just for their friends will probably still take place. Sherlockiana is not a field one spends much time in for profit . . . unless one counts "squee" as currency (or one of the less high-pitched expressions of delight, of course, for the easily-embarrassed). Because the best collections we have are the ones with memories attached, as memories are proven to be fueled by emotion.

Such items will actually carry a sense of that forward to an appreciative future owner in many cases, as with that Clients Case-Notes. I know I didn't lay hands on it in 1983 . . . or did I? . . . but just paging through it now and reading a few of its articles yields an echo of the pride those original Illustrious Clients of Indianapolis much have felt when this first hit their hands, after what was surely a long, hard journey into print.

And there is a certain beauty in that, one that keeps it on a collector's shelves, even now.
Posted by Sherlock Peoria at 10:36 PM