That bare space on the wall

Tonight I looked up at my wall and saw a bare space. And I puzzled over it.

The Sherlockian library here is not a room with bare wall spaces. It made me think of that moment in "The Adventure of the Cardboard Box" (the moment's first run) when Holmes catches Watson looking at an empty space on the wall and deduces that he wants to put a portrait of Henry Ward Beecher there.

I was not, until that thought, considering putting a portrait of the minister who pleaded for England to help the North during the Civil War up there . . . no, this is Illinois, and if any Civil War figure is to go up there, it's going to be Honest Abe Lincoln . . . no. Unlike Watson, who had Holmes there waiting to deduce what he was thinking, I was going to have to play both roles and deduce what I was thinking when I removed whatever was on that place on the wall.

Well, let's be honest, there was not much drama on either side of my Baker Street split personality as I remembered the roofers coming a month ago and taking down a few of the framed Sherlockian society membership certificates out of the concern that the roofing vibrations might cause them to leap from the wall and damage themselves. But it did make me focus a little harder on that space on the wall at 221B Baker Street.

Think about what that space tells us. Holmes's exact words:

"You were thinking that if the portrait were framed it would just cover that bare space and correspond with Gordon's picture there."

That one framed portrait would "cover that bare space." That means that every other bit of wall is covered with something else. Well . . . or else Holmes had ripped off a chunk of wallpaper for some investigating crime reason . . . but I think in most 221B recreations, the walls do look verrrry busy.

But what else covered those walls at 221B? Oddly foreshadowing paintings of Reichenbach? Valuable heirloom paintings by one of the Vernets? More framed prints of Watson's 1800s-era heroes? Watson's medical degree? Holmes's first consulting-detective-made pound-note? Motivational needlepoint? Antiquarian manuscripts? Mirrors? Skulls of exotic bovine with earmuffs?

In any case, I doubt Holmes and Watson had the same problem that I have, even after replacing those things I took down for the roofing: Too many framed pictures of Sherlock Holmes and Dr. Watson than I can fit on my walls. (At least I hope that wasn't a problem at 221B.) 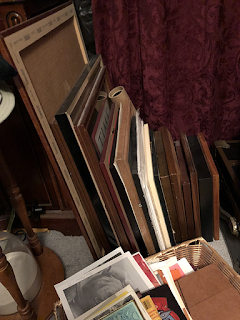 Posted by Sherlock Peoria at 10:52 PM