I admire the heck out of novelists like Lyndsay Faye. Not just for their talent, but for their discipline and all the other skills that get a novel to market. The first draft of a novel can be written on sheer obsession, and I've done that three or four times. The self-discipline it takes to do a second draft, to self-edit, to improve it, to market it to agents or publishers, and all that comes after? That takes somebody special.

But where those things never served to get me to even self-publish a novel, there's one motivator that finally got me over the finish line: guilt. My mama taught me how to access my guilt early on.

Sometime in October I was fiddling in Photoshop, emulating one of my favorite Twitter feeds, Paperback Paradise, and re-titling a funky old paperback copy of The Adventures of Sherlock Holmes with the new title Radix Pedis Diaboliday by Sir Arthur Conan Doob. I tossed it out on Twitter, and didn't consider what the immediate Sherlockian reaction would be: To Google the book to try to buy one.

Well, having suckered a good friend in so, I felt kind of badly about it and with National Novel Writing Month coming along immediately after, I set myself a goal, to write Radix Pedis Diaboliday. The novel, it turns out, is the "Mormon segment," so to speak, of "The Adventure of the Devil's Foot." When Watson starting tripping on the African herb, he actually went a lot more places than in his paragraph or two in the story and just left that part out. His "dweller upon the threshold" actually had a very familiar name, and Watson's trippy tripping was quite a journey.

So with the goal of having a novel in print by month-end, I set about writing, as well as doing something else: Asking for addresses for a Watsonian Weekly "Christmas Card list." Sure, I wanted to publish one for the first person to try to Google the book, Paul Thomas Miller, but it seemed a nice little "Compliments of the Season" for a few other folks as well, like those dedicated souls who still send me Sherlockian Christmas cards after all these years. Once the thing got printed, by the ever-reliable 48 Hour Books, whom I've had good service from in the past, I sent the first copy off to Paul and packaged up the rest to go out after he got his, all the way over in Portsmouth.

Once that happened, the novel's actual release date to all those whose addresses I gleaned was set for Monday, at which point the other copies would be mailed out.

So now, among the billion other Sherlock Holmes works out there, is a silly little novelette (it's only about a 100 pages cover to cover) called Radix Pedis Diaboliday by Sir Arthur Conan Doob. There's only twenty-five copies, so it's not going to set the world on fire, but, hey, I finally published a novel! It might even prime the old clogged book-pump for something next year.

In any case, I definitely want to thank Paul Thomas Miller for being an inspiration this year, in so many ways. He's one of those Sherlockians that makes this party worthwhile, and I hope he gets a book dedicated to him one day that has more copies than this one! 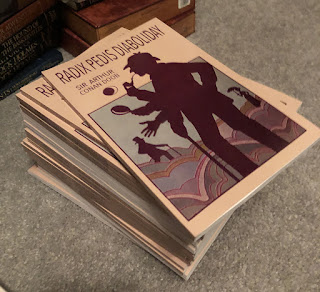 Posted by Sherlock Peoria at 8:20 AM