Listening and the Algonquin

In one of life's odd coincidences, I started reading You're Not Listening by Kate Murphy on the very same weekend that many a friend and acquaintance is enjoying the Baker Street Irregulars functions in New York. The coincidence was not because nobody wasn't listening, but because in the very first chapter, "The Lost Art of Listening," Kate Murphy writes about the Algonquin Round Table.

The Algonquin Round Table, for those not familiar, was a particular table at the Algonquin Hotel off Times Square, where various writers gathered in the 1920s for bouts of wordplay and wit. The Algonquin Hotel, being home base for the Baker Street Irregulars for many years, gave that bit of literary lore one of its Sherlockian ties, and even though it was always reserved for the editor of The New Yorker in the 1980s, one could sneak in during the wee hours for a photo. 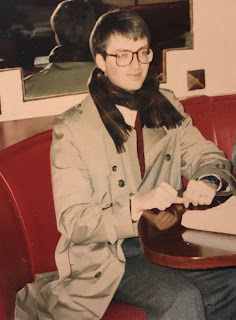 The Algonquin Round Table, with writers like Alexander Woollcott and Dorothy Parker tied to it, is used by Kate Murphy to illustrate how even a lively and entertaining group who met every single day could still be "profoundly lonely and depressed people." She quotes Parker saying, "The Round Table was just a lot of people telling jokes and telling each other how good they were. Just a bunch of loudmouths showing off, saving their gags for days, waiting for the chance to spring them . . . There was no truth in anything they said. It was the terrible day of the wisecrack, so there didn't have to be any truth." The parallels to Twitter and the chase for clever tweets that garner likes makes for an easy comparison.

Coming upon that part of the book was one more reminder of those pilgrimages to New York that I did make for Sherlockian purposes, before tuxedos overtook suits and disposable income became less disposable. Looking back across the years at this point, it's interesting to see which conversations and fresh new acquaintances stuck in my memory . . . which must have been those I did listen actually to, for my memory to hold on to them so firmly. There are the faces which finally got attached to names, of course, one of the big benefits of the yearly gathering, but it's the conversations that I wish I could remember more of.

I should be finished with You're Not Listening well before April's 221B Con, which is a place I spend most of my time listening anyway, as the con is always a wellspring of Sherlockian ideas and varied points of view that one can't help but want to absorb every last bit of it. The airport Marriott may not have any historic tables to sneak a photo at, but I think the notorious Floor Bacon fills that role quite nicely. For this particular weekend, though, I just get to be envious of those who are willing to do NYC in January, and keep on reading.
Posted by Sherlock Peoria at 6:30 PM