Have you had your first deerstalker yet?

Even BBC's Sherlock had his first deerstalker moment, which was a happy little bit of fan service that even non-fan's got the point of. The deerstalker is iconic, and eventually, even those of us that hold it in high reverence as a crown we're not worthy of donning (which was a view I legitimately held as a young bull-pup) have to put one on at some point. 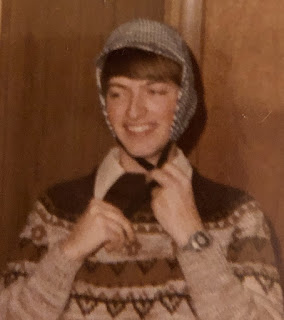 But even at that, I didn't put it one, make a serious Holmes-face, pick up a curved pipe and turn to show off my silhouette. No, I undid the flaps and pulled them over my ears. It was my first hands-on encounter with that particular piece of headgear, i had to see how those ear-flaps worked!

It's been a good deerstalker -- back in the day when such things were hard to find, I loaned it out to the local theater company and it had to be dry-cleaned, but it held up well and came back to me a bit softer, a wee bit shrunk, missing a label, but still in good deerstalker shape. 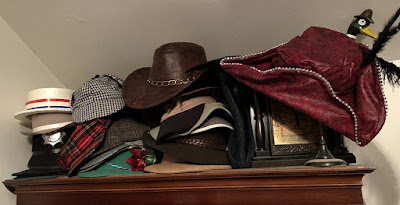 There are three main deerstalkers in my great pile of hats, one that belonged to my old neighbor, and one that belongs to the trusted companion. A few of the cheap costume ones are here too, picked up for specific purposes over the years. But that first deerstalker remains the deerstalker, my deerstalker, to this day. I think one of us has weathered the years a little better than the other, but then, I never loaned myself out to a local theatrical company. The poor hat had to teach me that lesson.

We get a lot of "first Sherlock" stories, but I'd bet there are some good "first deerstalker" stories out there as well. Mine's not particularly memorable, but there are those that have probably seen a lot more travel and a lot more adventure upon Sherlockian heads. Hopefully we'll get to hear some of those one of these days. 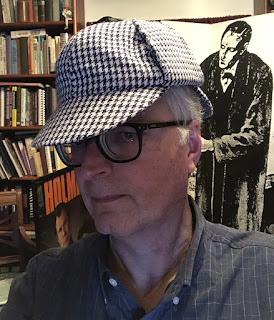 Posted by Sherlock Peoria at 10:29 PM