In another time, I might have felt a little more enthused about Adler, a new comic series from Titan Comics that began this week. For starters, here is the cover I wound up with . . . 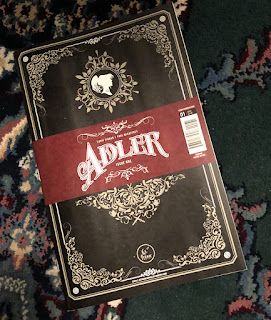 This is apparently "Cover C" of four options and something that might have been passable on a novel, but on a comic book? Nope.

Page one of the comic, instead of a splash page, is the credits. All male names.  Page two of the comic is the cast of characters. All female names. And plainly League of Extraordinary Gentlemen, but Women. We just wasted two pages calling out two things that aren't really positives for the comic, as well as spoilers -- if you have to explain the cast to me before the story, it betrays a certain lack of faith in the story. Also, that you're really trying to sell the League of Extraordinary Gentlemen thing.

Once we finally get to the story on page three, the art is pretty solid. There's a real focus on eyes in this story, and the ladies do tend to use a bit too much eye-liner on the underside of their eyes -- something I'd hesitate to criticize were this book produced by actual ladies.  As to the story itself, Jane Eyre is basically John Watson, coming back from war, needing a place to live, and Miss Havisham, who seems more of a brothel owner than a spinster, takes her to a lab to meet her Sherlock, Irene Adler.

Where is Sherlock Holmes in this world, you ask? Well, he's in Dartmoor chasing a hellhound, a fact we learn from Professor Moriarty, Irene Adler's nemesis. Ayessha pops in at the last, wearing exotic bikini armor while she sneaks around London, her part in the story unclear, but she has a vampire girlfriend, whom page two told us was an assassin. The last panel is a nameplate for Madame Curie.

For a book called "Adler," Jane Eyre seems to see all the action, and Irene is basically Sherlock Holmes in a dress thus far. Professor Moriarty gets to be the main character on about 25% of the pages of the book. The art is good enough to make one wish the story was an actual attempt to explore Irene Adler's character and give her some adventures of her own to make it seem like she should have a comic book.

One for the Sherlockian collectors, who might want all four covers. Otherwise, well, IDW has a comic called Wellington that has a demon hound in it that will probably satisfy your Sherlock-comic fix a little better.

Posted by Sherlock Peoria at 10:14 AM