No Marvelous Books Like This Barred, For Damn Sure!

You will, along your Sherlockian travels, find those who take their Sherlock with many a spoonful of seriousness stirred in. I am not among them. I worried less about dotted "i"s and crossed "t"s and more about whether or not fun was had . . . a horrible attitude for one who occasion finds the word "editor" appended to his Sherlock role, I'm sure, but I've got other places to go for no-fun that actually pay me money. And, when I only have to spend $4.44 of that money to get the latest book on our dear Sherlock, well, that makes me even happier.

But the best thing about the newly released paperback No Holmes Barred: Being a Scrapbook of Homesiana isn't just that low, low price in a world of books costing ten times as much. It's the feeling behind it. This isn't a book that's going to make you do more work in the study of its pages. It's a Sherlockian safari taking you on a wandering tour of both the familiar and unfamiliar, a jungle of prose, poetry, art, and articles where the unexpected awaits the flip of a page. Should I give away those surprises for the sake of review, or to entice you to buy (or download) this book?

NO! It's only four dollars and forty-four cents. Cheaper than two bean burritos and a small Diet Pepsi at Taco Bell, and that's pretty darned cheap. If you're not going to buy a four dollar and forty cent book just because it is all about Sherlock Holmes and Doctor Watson, well, you're not the sort of person that I'm going to waste my time trying to entice into anything. Seriously!

The motto of Doyle's Rotary Coffin is "No Holmes Barred," which is also the title of the book, and to those who fully accept that motto, whether or not they've printed out and signed their official membership card to join Doyle's Rotary Coffin, this is a book one can find some of that affection for in its acceptance of how varied a creature Sherlock Holmes can be.

Also, there's a wonderful bit of history entitled, "The Greatest Achievement Ever Made in a Holmes & Watson Film: Holmes & Watson," which the good Carter enjoyed having read aloud to her this evening in its entirety, especially at its glorious climactic crescendo which placed Holmes & Watson on its true place in Sherlockian history. And that's not even the best part of the book, but I just had to mention it for . . . well, reasons.

So HERE'S A LINK TO THE AMAZON SITE THAT SELLS IT. You know what you need to do. Godspeed. 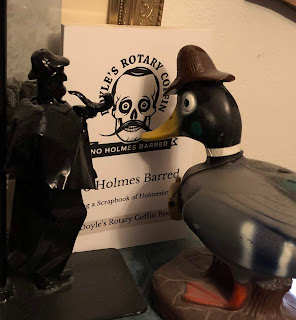 Another fascinated reader.
Posted by Sherlock Peoria at 10:12 PM