The Return of the Dangling Prussian

The above is a completely factual statement, oddly enough. How? 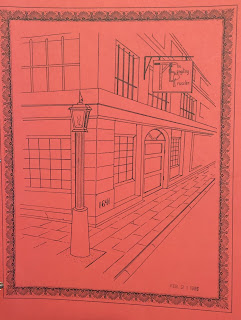 There's a whole long involved story about how the Prussian came to be, besides the rumors of the fate of a particular German spy. It involves Dubuque, Iowa, an Englishman, and a Spider. But the short version is this: I wanted to do virtual Sherlockian meetings before the internet existed. When all we had was the good ol' U.S. Postal Service. Impossible, you say?

Well, even if you don't, there is one place where the impossible is very possible, where Sherlock Holmes and John H. Watson live on, and where it is always . . . always . . . 1985.

Armed with only an IBM Selectric typewriter and a group of friends who liked to write letters, I gathered nine Sherlockians in the upstairs clubrooms of a pub called the Dangling Prussian. Gordon Speck, Jim Duval, Paul Herbert, Bill Cochran, Pj Doyle, Pattie and Terry Brunner, the good Carter, and myself became part of the story of a meeting -- the first meeting of a brand new Sherlock Holmes society called "the Montague Street Incorrigibles."

Everyone had been asked to send in some words of greeting, some general conversation on the story for the evening ("The Musgrave Ritual"), general musings on other topics, and, eventually, comments on the previous meeting. Those words were woven into the resulting story of that meeting on February 21, 1985, in the inn where it was always 1985.

We met three times a year, and little props came into the meeting packet to enhance the experience, including recipes for the annual banquets -- well, except for the time Moran was the caterer and packets of instant gruel arrived with the meeting story. The sergeant-at-arms was the big fellow who ran the inn, named Arminius Detweiller, and I served as the club secretary, working part-time behind the bar for Detweiller as the 1895s went by. 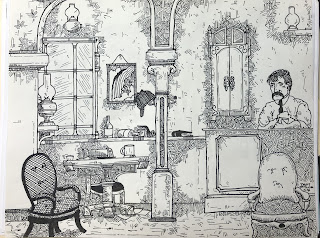 Inside the Prussian by Troy Taylor

The one-big-story version of the Montague Street Incorrible meetings lasted three years, with all the work it entailed, and then, in 1991 (and also 1895) the Prussian re-opened as an amateur press association -- another pre-internet make-do, where a publication was collated from individual pages sent in by the members of the association. That first gathering, with original Incorrigibles Pj Doyle and myself, adding in William Ballew, Peter Blau, Bob Burr, Wally Conger, Linda Reed, Tina Rhea, and John Stephenson. That version lasted until 1998, and got a lot more raucous, with some members writing their own stories of the goings-on downstairs in the main bar-room of the inn. Signora Ricolletti was hired on by Detweiller as the club's formidable bouncer, and despite that, there was at least one big fight with Alexander Holder.

Canonical characters did show up quite often during both incarnations of the Dangling Prussian, and I really wish it could have been kept open until 2004, when the Dark Lantern League -- a full role-play group -- started up, and could have me there. But that's another story.

The reason for this little trip down memory lane is my being invited to bartend virtually once again after twenty-some years, for a happy hour at the Dangling Prussian, this time over Zoom on Friday night June 12th, as a part of the massive Scintillation of Scions on-line symposium.  That Friday night will feature fifteen different guest bartenders, each with their own bar/lounge, ranging from the Tankerville Club to the Petri Wine Bar, with some really fun hosts. You have to be signed up for the symposium to join in, and it might even get a little crowded -- the sign-ups for the Scintillation have been impressive.

I got the late shift, so who knows what the crowd will be like at that point. This time the story is definitely going to write itself, though, so I will be very curious to see how it works out. (Oh, and by the by . . . the bartender at the Dangling Prussian prefers mead and mead-based ciders and wines for the drink specials. I mean, c'mon, Sherlock Holmes didn't retire to a vineyard like Jean Luc Picard, now, did he? And if anyone deserved the spirits of the gods, it was our consulting detective friend.