What Happened to Mary

Okay, so here's a curious sidelight on where Sherlockiana will lead you.

You may have noticed the book covers from "the library in my dreams" that appear on my Twitter or Facebook feeds every night, you know that usually I take some old book and play with it a bit in Photoshop. We've gathered a lot of old books in our house over the years -- I love those with illustrations printed on the cloth of their hardback covers, and sometimes will pick one up just because it's such a pretty book. Other books on our shelves come down from my mother, and even my grandmother. Tonight, because of the tempting title, I displayed one as it really looks: What Happened to Mary by Robert Carlton Brown. 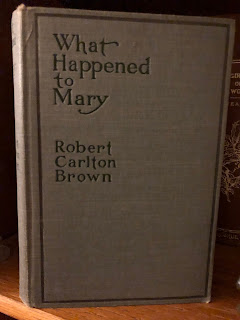 We all wonder what happened to Mary Morstan, John H. Watson's wife, so the title makes the Sherlockian imagination run wild. Could it be that Robert Carlton Brown knew something of Mary's fate we did not?

After posting the picture tonight, I started becoming curious as to what the book was actually about, and quickly found it was more than just a novel.  What Happened to Mary was the 1913 novelization of a silent movie and stage play, given to my grandmother by her mother. For illustrations, it includes photos from both the movie and the play. The idea of a novelization from an era when Sherlock Holmes was barely done with his active career is very cool, and now I'm finding myself drawn to this Mary to see what parallels to Mary Morstan might show up and give clues as to that Mary's fate. I mean, look at this . . . 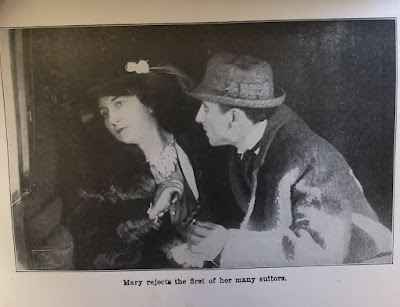 Mary is rejecting one of her "many suitors." We knew Watson's wife drew "folk who were in grief ... like birds to a light-house," but did she draw unwanted suitors as well? 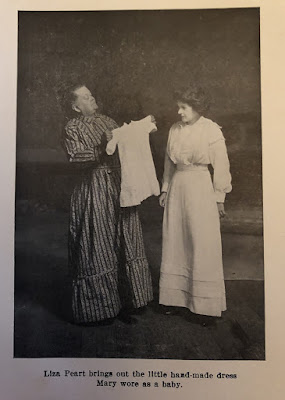 And what secrets do Mary's baby clothes have to tell? We know her father sent her back to England, a country where she had no relatives, as a child, her mother having died some time before. There is so much we could stand to learn there as well.

Perhaps it's just all wishful thinking on my part, that a book with a title that lines up with Sherlockian dreams came along at a time when I was thinking about Sherlockian dream books. And to consider that any two women who just share the name "Mary" might bear parallels to one another and reveal secrets on their name-twin is sheer folly. But madder things have been done in the name of Sherlock Holmes, so it's worth a look, isn't it?

Of course, it's not like there aren't a thousand other things to do right now. Being a Sherlockian shut-in seems to make the projects multiply rather than reduce them, here at Sherlock Peoria. But we'll see where this odd 1913 side road leads, in any case.
Posted by Sherlock Peoria at 10:48 PM