Somehow I stumbled into the Library of Congress photo archives online this week, and in searching for Sherlock Holmes, found this little beauty, a photo of an old Wyoming hotel named Sherlock Hotel. 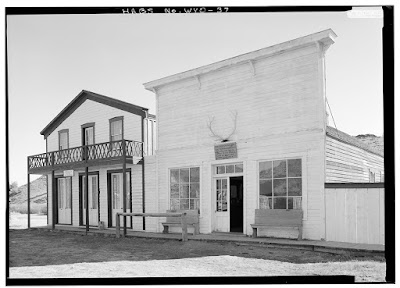 South Pass City, Wyoming, was born out of an 1865 gold rush, with a population that rose and fell with the gold. Three years in, a little hotel called "Idaho House" opened for business, eventually became "South Pass Hotel and Restaurant," and then, in 1873, was bought by a widow named Janet Sherlock. 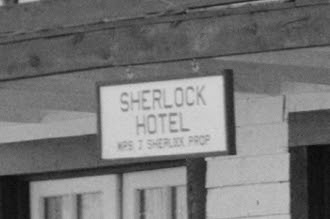 The neighboring Grecian Bend Saloon has a lovely little sign in the photo that declares it was "Built by Sherlock in 1889" and anyone with sense would immediately go "Okay, another business for Janet Sherlock!"  But who ever accused a mad Sherlockian of having any sense? 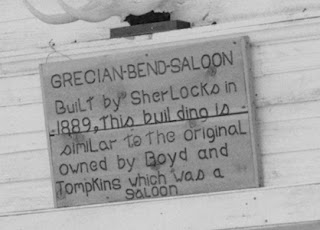 I mean, come on! "Built by Sherlock in 1889?" Two years after Watson published A Study in Scarlet and the year before The Sign of the Four? And, 1889, a year where Sherlock Holmes had no recorded cases for the first five months? And, point three, did you ever notice with the timing of Reichenbach Sherlock Death and Watson writing for Strand, that Watson didn't tend to publish stories when Holmes was active in London?

Sure the widow Janet Sherlock was a major figure in Wyoming women in business. Sure, she also owned the the Smith Sherlock General Store and the whole town is now a historic site. And, sure, she was also born Janet McOmie in Scotland in 1844, and came to the United States in 1861 after converting to Mormonism and married Richard Sherlock, by whom she had three children.

But is the lunatic Sherlockian supposed to just accept that twenty years later, a fellow with a name very much like "Sherlock McOmie" just happened to be in London solving the murder of two Mormons who had been chased out of America by a crazed trapper? Are we supposed to just look upon that as mere coincidence?

Let's get back to that Grecian Bend Saloon, founded in 1889. You do know that in 1888, the kidnappers and murderers of a Grecian gentleman escaped Mr. Sherlock Holmes and were later vaguely said to have been brought to vigilante justice in "Buda-Pesth." So if Sherlock Holmes had some reason to leave London in 1889, and followed some criminals to America, and maybe even had some relatives in Wyoming he wanted to visit . . . .

Nawwwww, that wouldn't work at all, would it?

Oh, well, ghost towns are kinda cool anyway. And this one has a Sherlock Hotel.

Posted by Sherlock Peoria at 11:15 PM