Arrows are the new black.

Since I didn't make it to 221B Con this year, I didn't get to work on my choice of cosplay ideas for the con. As I tend to run hot, most Victorian garb leaves me sweating a tad more than I'd like on such occasions, so this year I was going to opt for one of the most comfortable outfits to be found in the original Canon: Jack Prenderghast's prison garb. 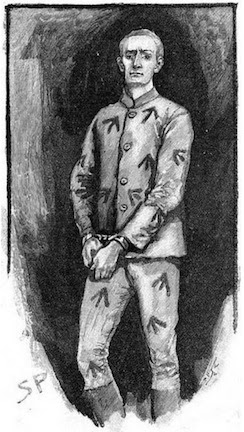 In Britain, that outfit might be as boringly mundane as classic prison stripes are here in America. But here? I think it would be kinda cool.

As much as some fanboys famously pooh-poohed the fangirls a while back, I totally credit their feminine influence for the rise of cosplay as an accepted mode of fan creativity. Sure, there were those Holmesians and Sherlockians of decades past who dressed in a Victorian fashion for a special event, but those were special events, and at normal gatherings of Sherlock fans, the odd costumed person tended to stand out. I remember one fine fellow at a Lisle, Illinois workshop back in the eighties who appeared each day in a new costume -- as is quite con-normal now -- but he was the only one.

And a con, something Sherlockiana has long been short on, is really the best place to do serious cosplay. When everyone is in an enclosed space, like a hotel or convention center, strolling around in something completely impractical is a lot easier than wandering the streets of New York City during the Holmes birthday weekend, with functions some distance from each other.

But back to the Prenderghast suit: Having done a Snake Plissken cosplay during one previous adventure, another convict who would attempt escape seemed a nice match for me. And unlike the stripes of American prison garb, the arrows have a much more specific meaning: "property of the Crown." And since the year the Gloria Scott sailed was 1855, well into the reign of Queen Victoria, those arrows on Prenderghast meant the man inside the suit was the property of that "certain gracious lady" herself, in a sense. The idea was to demean the convict to the status of property, but as a temporary costume? It's kind of like bullet-pocking a "V.R." -- a nice little tip of the cap to Her Highness.

Just because I'm writing about it here does not mean I won't eventually get said costume together, or that you aren't welcome to beat me to it. In fact, it would be cool to have a whole Gloria Scott prison gang at a con one day. It seems, as I said, like it could be a very comfy outfit, which I'm sure it wasn't for its original wearers.

As to why I'm writing about it here? Well, season two of Orange Is The New Black is being watched currently here in Sherlock Peoria, and I just wanted to use the blog title "Arrows are the new black."

As Jephro Rucastle once said, "We are faddy people, you know."
Posted by Sherlock Peoria at 10:52 PM