Is the BSI relevant in the age of the internet?

I'm always hesitant to blog about the Baker Street Irregulars of New York these days.

It's not because I fear the ire of its powers-that-be, or the occasional grumpy e-mail or two that follows. One gets used to those things over time. No, I hesitate to write because I get a real feeling that nobody much cares about them so much in this latest Sherlock boom.

Once upon a time, when one graduated to the larger Sherlockian world and bought a Baring-Gould Annotated, one of the early chapters, fully equivalent to that on Holmes, Watson, and Baker Street, was a whole chapter on the Irregulars and all the fun things that whimsical and celebrated fan club did when they invented the whole Sherlock Holmes club idea. (Yes, yes, the Sherlock Holmes Society of London was inventing it at the same time, but we weren't as globally-thinking back then.) And the Baker Street Irregulars was where you could write (via snail-mail, of course) to get connected to the larger Sherlockian world.

But times change, and social networking has really changed, and one is left to wonder. Go looking for that other esteemed Sherlockian society of old, the Sherlock Holmes Society of London, and you find a lovely and interesting website, details about what they're up to, their history, etc. Go looking for the Irregulars, and what do you find? A pretty weak Wikipedia article, and maybe this: 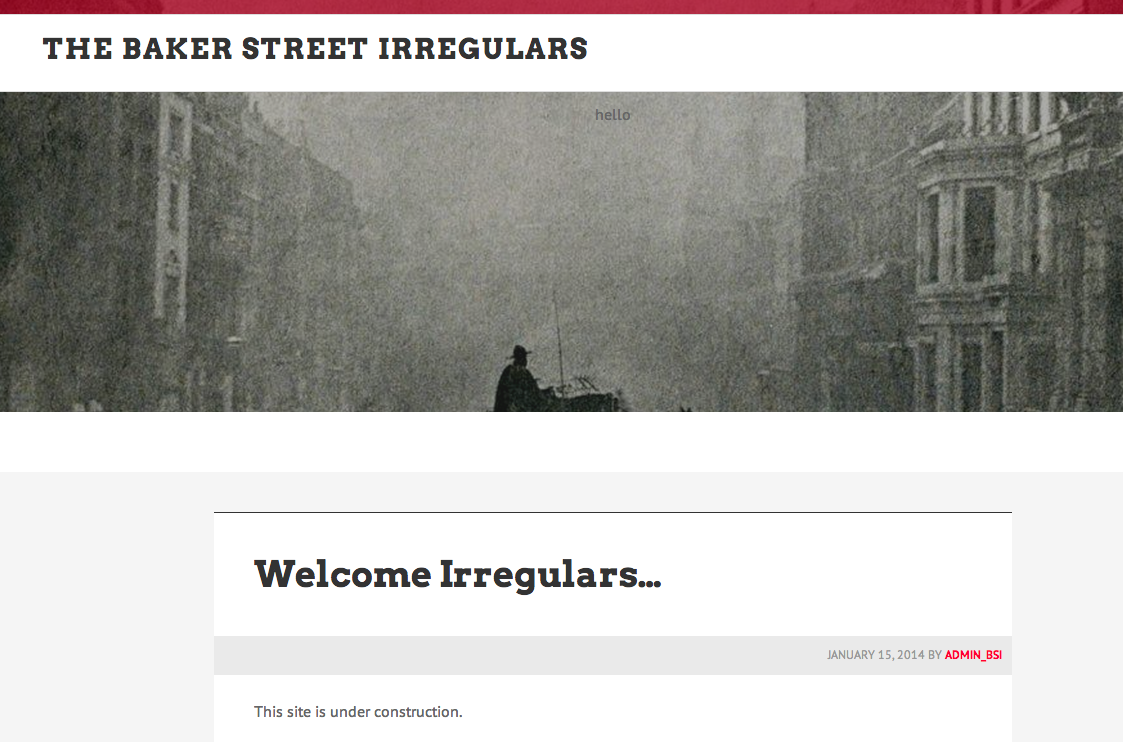 Why? Because America's oldest Sherlock Holmes club doesn't want you. Let's be honest, now.  The guy in charge hand picks who gets to be a member of the club (and now, apparently, who doesn't get to be a member of the club) and loves talking about how it's "a literary society," which lets him ignore prominent fans of any TV or movie Holmeses at will. There are plenty of excuses about "Oh, how, oh how could we hold our annual dinner if we just let anybody be a member?" despite the fact that the Sherlock Holmes Society of London seems to do it every year. But in the end, it all comes down to one thing: the guy in charge wants to keep getting to pick which Sneetches get stars on their bellies and which don't. Keeping the little garden that blooms once a year well weeded. And that comes with a cost.

I wonder if the Irregulars aren't just slowly hand-picking themselves into irrelevance. By picking a small number of safe choices each year, people that the one guy has to like, there's a certain spark that could easily get missed, and a certain tendency toward encouraging butt-kissing. (Anybody really notice when the "Two Shilling Award" quit being for contributions to Sherlockian culture and more about contributions to the Irregular organization under the current regime? I did.)

Yes, they have a lovely publishing business, but I remember some guys like David Hammer, Jack Tracy, and Sam Gringras, who had Sherlockian publishing interests that did great things for our Sherlockian world in smaller print runs than any big house would have allowed. Do we need the B.S.I. to be a publishing company? And yes, they now have a Harvard archive about themselves, when the in-house historian, a guy named Jon Lellenberg, once did pretty well at that, possibly having a greater impact than the archive ever will, unless somebody just like him gets a fire in the belly on some future occasion.

But the thing that gets overlooked, time after time, is that the Baker Street Irregulars of New York is, whether we like it or not, America's main Sherlock Holmes society. America's big Sherlock Holmes fan club. And instead of being a flagship, it too often seems like a private yacht for a few invited guests to cruise around singing, "I'm on a boat!" Is that fostering connection and helping support our Sherlockian community here in the states? No, but I'm sure there are many who might say that's not the BSI's job -- which is to hold one entertaining dinner each year for mostly the same crowd. (Except for maybe the publishing and the archives . . . . and this paddle game . . . and this remote control . . .)

And when you look at it in that light, I really shouldn't have brought up the website business, or any of the rest of it. A little banquet for mostly the same couple hundred people every year doesn't really need a cool website, or a social networking presence, or, really, relevance in the internet age.

I probably shouldn't have brought any of this up at all. I just find myself a little fired up that a guy who I have tended to disagree with got yanked from the official BSI membership roster, something that doesn't even happen to dead people. And if somebody's going to start shouting "Off with her head!" Some of us are going to feel the urge to stretch our neck out on the block and say, "Let's see how sharp that axe is."
Posted by Sherlock Peoria at 9:19 PM