As you can see, there were about fifty people there, only one of whom was in costume, and the program was definitely single-threaded. Now, here's a photo of just the costume exhibition from the weekend of Sherlock Holmes fans I just attended in 2015. (There are very few large group shots in a conference of hundreds and hundreds.) 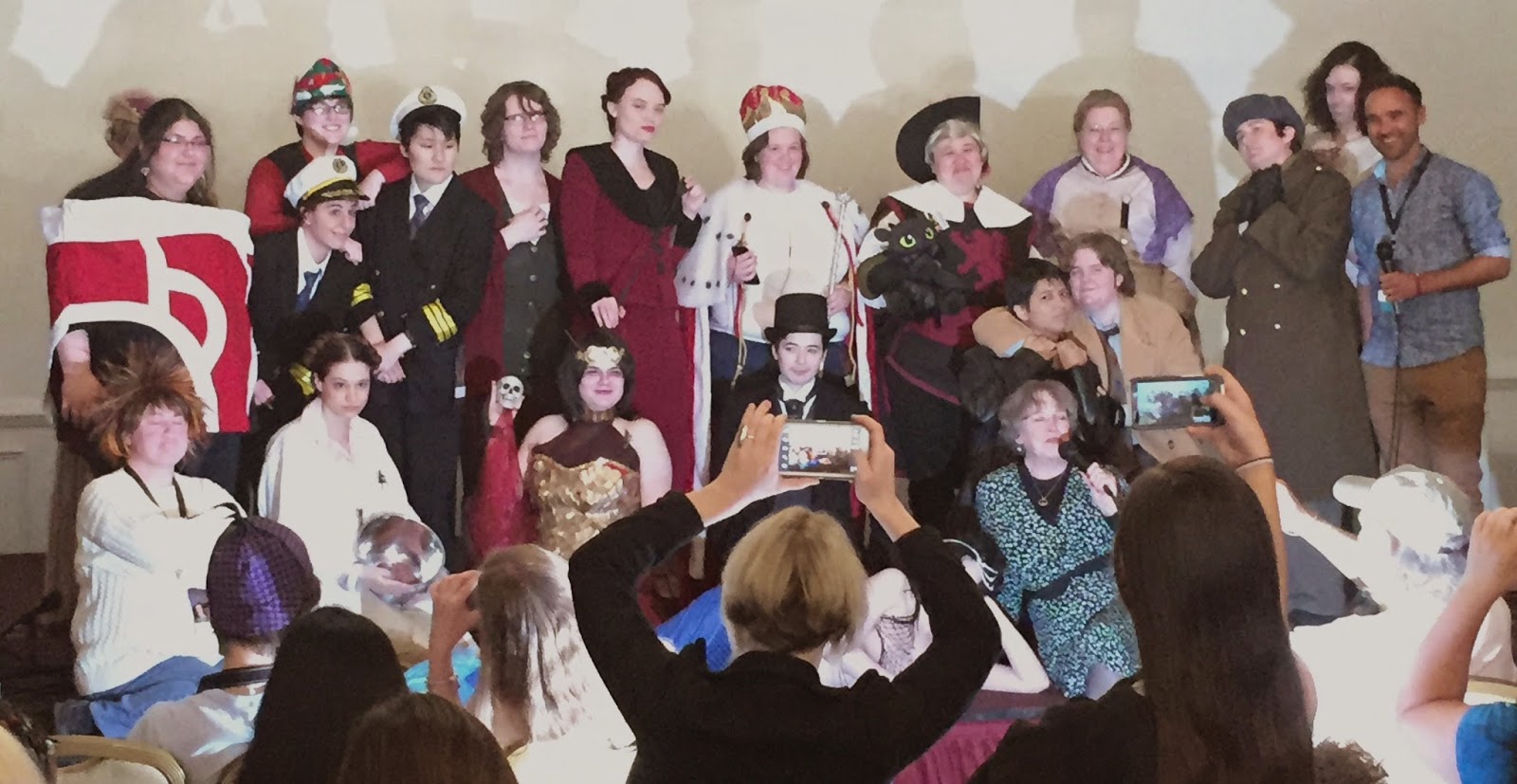 Times have changed a little bit, and it's not just because one of the pictures is in color. (We had color film in 1983 -- it was just if you wanted to print a photo for publication on a fan budget, you had to print from black and white to get the best results.)

The similarity between those two pictures? Both events helped give me new eyes about Sherlockian culture. In 1983, I was like a first-time attendee at 221B Con, just finding out all the things out there I hadn't heard about yet. And in 2015, it started feeling like the 1980s all over again to me.

At the first 221B Con two years ago, I think I spent the whole weekend in shock. Never having seen seven hundred people interested in Sherlock Holmes in one place before, let alone any wearing Irene Adler lingerie, I was just trying to wrap my head around the basics of what was happening. This year, my second time at the con, I came a bit better prepared, and when at it trying to learn as much as I could . . . because 221B Con has a lot to teach an old school Sherlockian like me, a lot more than the more traditional venues, no matter how much new research the speakers at said venues have done this time around.

There's an energy among the newest generation of Sherlockians that seemed very familiar, and one aspect of it became clear early on, talking to Cloakstone69 (a.k.a. Valerie) as we waited in line for registration. She pointed out how a lot of Sherlock fans came to the fandom after being Harry Potter fans, and it reminded me of all the Sherlockians I knew in the past who came over after being Star Trek fans. It's that "fandom gene" that one hears mentioned now and then (though it's not a gene passed through bloodlines on most occasions). Fans are fans, and if Sherlock Holmes had never existed, we would probably all be connecting through some other mutually harmonic legendary figure.

Another aspect of the familiar fannish activity was the pure creativity of a younger fandom. We saw it in the Sherlockian surge of the 1980s -- people coming up with wild new ideas for celebrating Sherlock Holmes -- before the gravity of "AGAIN! AGAIN! AGAIN!" calmed things down again. People enjoy a moment and, like a toddler who just uses that single word, want to keep repeating that moment, creating rituals around it, trying to archive it, institutionalize it, gain control over it . . . instead of moving on to enjoy some new moment.

Some good things do come out of the "AGAIN!" moments. Culture and progress depend upon a certain continuity. 221B Con can't have it's first year all over again every year, with its marvelous lack of expectations. But it can take the best of previous years and try adding new things to the mix -- Ben Syder's presence this year was fabulous, but he was just the right celebrity for the con, becoming a great part of it without turning it into something else. Keeping an event like this going takes a delicate mix of the fresh and the familiar, and this year's 221B Con definitely had that.

Too much in fact, for as usual my bout of "con-drop" includes the regrets of missing all those panels and events that were happening while other panels and events were happening. All the people I didn't get to say hello or good-bye to in the rush of one thing to the next. Especially Howard and David, who were last seen in a panel where a particular panelist comandeered the thing for multiple soapboxes. You fought the good fight, guys, with more patience and self-control than I could have! But now I have to live with the vision of them in some eternal panel purgatory, somehow stuck in that room still . . . .

I enjoy the hell out of 221B Con, and this being my first year with a smart phone, it was enhanced even more. The ability to see what so many other attendees were thinking, enjoying, and hearing added to my own sensory inputs added some amazing dimensions to the event. A sort of group mind can develop at a con anyway, but technology is making us near-telepathic and bringing us ever closer to the real thing. And the con experience -- with so many creative minds, not just the organizers themselves -- bringing treats to the table (Who knew badge ribbons could be so much fun?), there is no other Sherlockian experience like it.

I still can't recommend it highly enough to any Sherlockian who is willing to come without expectation, immerse themselves in new worlds of Holmes, and just boldly go for it. And I've still got enough Trekkie in me to use Star Trek II: The Wrath of Khan (the one where Khan wasn't Benedict Cumberbatch) to express how the thing makes me feel.

There's a scene in that Nicholas Meyer-written film after Mr. Spock has died and Captain Kirk, Dr. McCoy, and Carol Marcus are looking down at the newly-created Genesis planet, teaming with life. After dealing with the onset of age the entire movie, Kirk is asked by McCoy how he feels after all that they have been through.

Like the aging Shatner of that film, I know I'm definitely not as young as I once was, but something about 221B Con, "seeing new life, and new civilizations," seeing new creations flowering like the plants of a Genesis planet . . . well, it just makes you kind of forget that Chris Pine will eventually be coming along to replace you.

************************************
Postscript about the old photo at top: If you wonder where I am in the picture, look for the bearded fellow in the Hawaiian print shirt in the upper right part of the pic. Among the others pictured, there is a least one fellow later thought to be murderer (since deceased), another whose name is best not mentioned on the Sherlockian internet, and some, I am happy to say, who are prominent and active Sherlockians still today.

Posted by Sherlock Peoria at 8:54 AM