A Baker Street Bash in Peoria.

One would think anyone who is Sherlockian enough to write a blog about Sherlock Holmes would do something as obvious as promoting a Sherlock event that they were speaking at . . . at least with their blog.

But there's the run-up to Christmas, and work projects are coming due, and a new Star Wars movie is finally coming out, and there's a winter solstice event to be planned, and then there's actually getting a presentation and display materials ready for the Sherlock event itself . . . well, you get the picture. Plenty of excuses, but in the end, the time comes and the event is going to happen no matter what you did or did not do.

Happily, I had a great time speaking at the Peoria Public Library's "Baker Street Bash" this Saturday, and participating in the goings-on there. Jamie Jones, the branch manager of the library's McClure Branch put on what was basically a Sherlock mini-con that afternoon, with trivia, photo ops, prizes, a scavenger hunt, cool Sherlock crafts, and a decent speaker (that would be me . . . I don't think it's putting on too many airs to rate myself a "decent"). It was a great little event, and I'm already looking forward to the next one, which may occur just before the fourth season of Sherlock comes out.

Here's the local newspaper article link to The Peoria Journal Star article on the event.

And here's a couple of pictures the good Carter took . . . 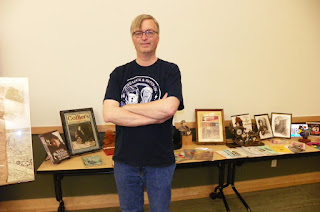 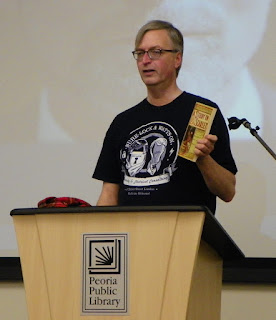 Yes, I went informal with the "Sure-lock and Wattson" t-shirt I'd picked up on TeeFury some time ago. I considered the Three-Patch "221B or not 221B" shirt, but it may have been in the laundry. Since the shirt actually got newspaper coverage, I kind of wish I had found the Three-Patch shirt, but as with air travel, the days of suit-and-tie Sherlocking are well behind us.

As I said, it was a fun event, with some good planning behind it, but as is usually the case, one of my greatest joys was the unplanned and unexpected parts. Four different former members of Peoria's Sherlockian society, the Hansoms of John Clayton, all showed up at the event: Jim Ludwig, Norm Kelly, Cy and Kay Fahnestock, all folks the good Carter and I had not seen for a decade or two, and it was good to catch up. We met some new Sherlockians at the event, too, and as every Sherlockian who has been to very much knows, it's the fans of Sherlock Holmes in attendance that always make these events, large or small.

Speaking at the event was a very delightful duty, as I got to spin off from the upcoming BBC Sherlock Christmas Special to talk about how well Sherlock connects not just to the Canon, but to the past one hundred and twenty-eight years of Sherlock Holmes lore. That show makes it pretty darn easy to dive deep into even things like Sherlockian scholarship with its love of all things Sherlock.

As I said, though, the Baker Street Bash's organizer, Jamie Jones, did a great job of putting it together, and even if I wasn't speaking, I'd still have had a great time Saturday afternoon. Like the name of the blog says: "Sherlock Peoria." Because Peoria always has a place for Sherlock Holmes.
Posted by Sherlock Peoria at 10:56 PM