The Sherlockian feline of the house.

Since the storm was had awakened us both this early Monday morn, the world's most Sherlockian cat and I had to dig through his toy basket to find something different to play with. And there we came upon a memory.

Now, I know there are a lot of Sherlockians out there with cats. Cats named "Moriarty" or "Violet" who play with homemade Sherlock cat toys and drink from Sherlock water bowls, so one might think my claim to owning "the world's most Sherlockian cat" might be a bit exaggerated. And it probably is. But indulge me.

Mister Tinker, as we call him, when he's in trouble and needs a full name, was not named after either Canonical tinker reference, but he has moments when he might fit "a tinker's curse" from "Illustrious Client" . . . such as this morning, when the storm outside has him frustratedly unable to go outside and he's feeling bite-y from boredom. (A Sherlock-ish trait, I'm sure.) The reason I call him such a Sherlockian cat, however, has nothing to do with his name or personality. 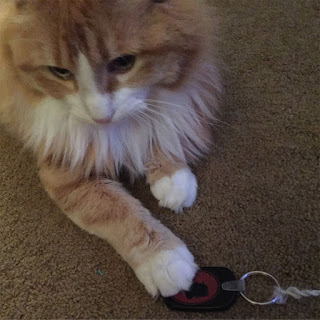 Here he is playing with his oldest toy this morning, a Sherlock silhouette key ring tied to a frayed old cord. The toy came with him from his previous owner a good three years ago this January. Mr. Tinker is a Sherlockian legacy cat, you see.

While I prefer cats, with their self-cleaning, no-attention-required bathroom habits, and ability to leave one alone most of the time, to dogs, I am not exactly a cat person. Or a pet person, really. And yet here he is, this easily-bored, fiesty tooth-and-claw predator now taking a nap on the floor not far from me, because he wandered on to the patio and into the life of my Sherlockian neighbor Bob Burr. And when Bob passed away, he had to go somewhere.

There's a whole story there about Mr. Tinker that is reserved for telling over drinks, but are there any other cats out there who have been owned by two Baker Street Irregulars? Given the Sherlockian world's friendships, I would be pretty sure there must be felines whose path has taken them through multiple Sherlockian households.

But for this morning, I'm giving old Tink the title of "world's most Sherlockian cat."
Posted by Sherlock Peoria at 6:34 AM