About Sixty: Why THIS Sherlock Holmes Story Is The Best!

On the third track on side one of the soundtrack to Rocky, there is a piece called "Going the Distance" composed and orchestrated by Bill Conti. It is a theme the Rocky movies come back to again and again, and has been used by sports television whenever possible. Perfect for a montage of battle, and even though attaching music to a web page is rarely a good thing, I'm going to mentally tag that piece for tonight's blog. I'm even playing it now. Because this is it, the grand finale to the Battle Royale reading of About Sixty: Why Every Sherlock Holmes Story Is The Best.

Things are getting rough here, and only the most determined and most talented opponents have lasted this long. "The Problem of Thor Bridge" comes in fresh, with David Marcum cheering its merits, but the story shoots itself in the head for a number of reasons. Then comes that rampaging ape of a tale, "The Adventure of the Creeping Man," and Barbara Rusch trying to tame its wildness using every intellectual discipline at her disposal. But we didn't come here for a monkey fight.

And "The Adventure of the Lion's Mane" tries to wrap its tentacles around the audience when Jacquelynn Morris brings it in, and she uses Sherlock Holmes's own brain to illuminate its motions, but I've noticed a strong tendency to favor the more human competition in this tournament . . . which I guess Holmes's brain is . . . technically.

"The Adventure of the Veiled Lodger" brings a more human face to things, hidden behind that veil as it may be, and Jaime N. Mahoney is not frightened by that face. But that veil is the only mystery to solve for this competitor, and all the rare and special qualities Jaime puts forth in promoting the tale don't quite make up for seeing Sherlock Holmes do what he's supposed to do.

Bob Coghill rolls "The Adventure of Shoscombe Old Place" into the ring where the battle for the title of "Best Sherlock Holmes Story" is going on, then immediately admits "Shoscombe" has no place there. But he pays a nice, loving tribute to the old duffer before ushering it back to the locker room.

And when "The Adventure of the Retired Colourman" makes it to the ring, its promoter Elizabeth Bardawill seems to know from the start that a lot of the audience is going to boo the story. Declaring "Colourman" a loser and then going on to declare that's what makes it great is a good gimmick, but in the end, this tale is still a loser and accidentally gets knocked out of the ring because The Sign of Four backed into it while maneuvering to get a grip on "Silver Blaze." Yes, Sign still somehow stayed in the ring when I had thought "Silver Blaze" knocked it out earlier.

Yes, I may have forgotten to mention the champions still in the ring for a while.

Focusing on the promise and attractions of each new Sherlock Holmes story to come into this Battle Royale might have made us momentarily ignore what was going on behind the latest and greatest entrance to the tournament, but the strongest stories have always been there, whittling away at the competition. Most of the sixty are gone now, sent back to the locker room, beaten and bruised. Who is still here? After sixteen days of constant battle, who is holding on?

Well, The Sign of Four and "Silver Blaze," as I mentioned. A Study in Scarlet, that original Sherlockian sinner. "The Adventure of the Cardboard Box" is still here. It fights dirty and somehow can disappear from one book and appear in another, just to keep itself in play. "The Final Problem" couldn't leave the ring if it tried. And as long as "Final" is here, bitter rival The Hound of the Baskervilles isn't allowing itself to be thrown out. "The Adventure of the Solitary Cyclist" seems to have been cycling around the ring fast enough to stay in, though I don't hold much hope for it once it gets off the bike. Badasses like "Black Peter" and "Charles Augustus Milverton" did leave their bloodstains on the canvas, but those don't really count.

When the tournament took its final rounds to Las Vegas, things got a little fuzzy for this ring announcer at first, and the influences of that gambling capital began to show on the proceedings. Vegas oddsmakers might have swayed the crowd as bets were placed on old favorites. 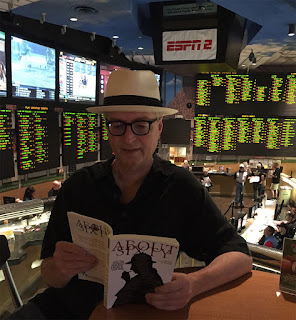 "Dying Detective" and "Illustrious Client" got a few wagers placed on them, but as this is a battle of for the best of the best of the best, they inevitably fell, as so many before them did. And even though a certain ring announcer kept pushing "Three Gables" back in, it could not hold on either.

In the final moments of About Sixty, one realizes that no matter how hard each of the promoters worked to put their story over, the major responsibility for winning or losing this tournament comes down to the competitor itself. It's skills, it's strengths, and what it has to show us when everything it has is on the canvas. And left to themselves, certain inevitabilities start to take place.

"Final Problem" does take down The Hound of the Baskervilles. And seeing such a strong novel put out of the ring, the brothers A Study in Scarlet and The Sign of Four team up to push all the short stories out of the fight. And then, well, then the elder brother is . . . well, the elder brother.

The About Sixty Battle Royale has come full circle and A Study in Scarlet takes the championship belt. Its ability to capture and hold that fresh spirit of Sherlock Holmes before any of his moves became expected, its original spark that gave life to all that came after . . . one has to wonder if Susan Smith-Josephy happened to be standing right next to him when Christopher Redmond first went, "Hey, I want to organize a collection to argue why each Sherlock Holmes story is the best!" just so she could jump in and go, "Give me that one!"

Did you see a result from experiencing About Sixty that was different from mine? Will you, if you haven't picked up the book yet? (And why not, it's that rare modern "must have" for a Sherlockian collection.) Let me know . . . or better yet, let Christopher Redmond know in case he decides to put together Sixty More Besides Yourselves: Why Every Sherlock Holmes Story Is Better Still (or something like that) one day.

Because I don't think Sherlockians will ever get done telling the world about their favorite Sherlock Holmes stories.
Posted by Sherlock Peoria at 10:34 AM