"Bacon" my way to Sherlock Holmes.

More than one Sherlockian I know likes to play "Six Degrees of Kevin Bacon" with Sherlock Holmes, a parlor game where you connect any given actor to an actor that has played Sherlock Holmes via their movie co-stars.

Here's an example from Don Hobbs's yearly attempt to connect Oscar nominees to Holmes from 2006: "Heath Ledger is up for Brokeback Mountain. In the film A Knight's Tale, that also starred Mr. Ledger, James Purefoy portrays Sir Thomas Colville/Edward, the Black Prince of Wales and he was James McCarthy in the Granada series Boscombe Valley Mystery."

This year, however, my love of comic books has taken that little game an entirely different direction, as I found myself connected to Mr. Sherlock Holmes himself in many degrees less than six.

It all starts with a couple of pictures. 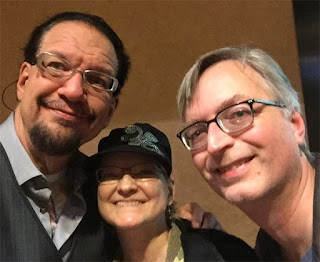 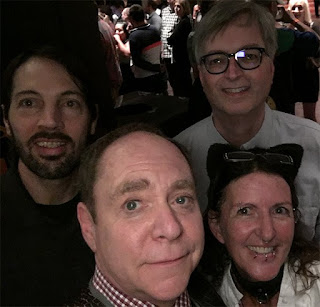 Over the course of the past twelve months, I somehow managed to see magicians Penn and Teller on three separate occasions. And since those generous fellows always kindly do a meet-and-greet at the end of every show, I had the chance to get my picture taken with them. Simple enough.

And then came the eleventh issue of a comic book called Spiderman/Deadpool, in which Penn and Teller switch partners with Spiderman and Deadpool. "AH-HA!" I thought.

Teller teams up with Spiderman, who teamed up with Batman in a 1995 comic book mini-series called Spiderman and Batman: Disordered Minds. Batman and Sherlock Holmes have teamed up a few times in comics, and even had a rap battle on YouTube. So with a few simple comic books, I now could connect myself to Sherlock Holmes himself with only a couple degrees of separation.

That number shrank even further when I then remembered Deadpool Killustrated issue number 4, in which Deadpool tried to kill Sherlock Holmes. Since Penn Jillette teamed up with Deadpool in the same Spiderman/Deadpool issue, and I had met Penn on a couple of occasions now, the Sherlock/Deadpool/Penn/Keefauver chain eliminated on extra link.

With both comic books and magicians about anything is possible, so it shouldn't have surprised me that putting the two together would create a cosmic connection to our old friend Sherlock Holmes. And as great as it is that an actor can be connected to another actor who played Sherlock, I think I'd rather just link up to the real thing.
Posted by Sherlock Peoria at 5:52 AM