As we humans first crawled upon the digital shores of the world wide web, one of the first things we noticed was . . . other humans. We suddenly were connecting with each other in ways we had never connected before over distances that made ham radio pale in comparison, at speeds that made mail service look static. (Even now, the very concept of ham radio and mail service seem like they were companion resources of the Pony Express.) Buyers with sellers, readers with writers, and even . . . people who bought a certain kind of clock with other people who bought that kind of clock.

Which brings us to the Hansom Cab Clock Club, a subset of the Sherlockian world tying together the current owners of a very Sherlockian-looking clock that once sold out of the Sears catalog. On the original Sherlock Peoria web site, you can find details about said clock as well as the nineteen members of the club when that site was still active.

The club began with the five people who owned such a clock at the moment Don Hobbs and I decided it was a thing. It seemed a natural spin-off of Peoria's own Hansoms of John Clayton -- we're all about the hansoms here in Peoria, though the city hasn't had one for a very, very long time, if ever. (Note to self: Find evidence of a hansom cab in Peoria.)

Eventually, as mentioned before, the membership grew to nineteen, and there it stayed until the past week, when two more name were added to those illustrious roles, yet were held up from being added to the old official pages as the computer that was used to administer the site finally gave up the ghost (and the lovely software that I was too cheap to replace along with it).

So here, for the first time on this edition of the blog, is the membership roster of the Hansom Cab Clock club, with our newest additions:

Some have passed on (and passed their clocks on, surely, yet once a member of the Hansom Cab Clock Club, always a member. All you have to do is have a picture of your clock posted in some incarnation of Sherlock Peoria (and hope the whole site gets redone in a better fashion some day). So below you will find photos of Monica Schmidt and Al Shaw's clocks so you can see the magic of hansom cab clockery for yourself. 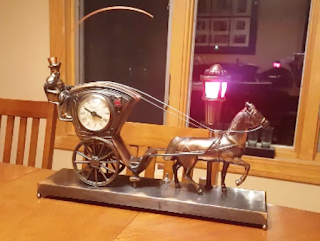 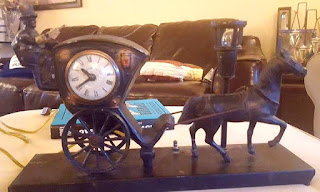 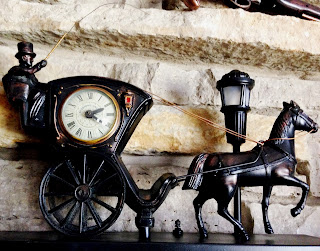 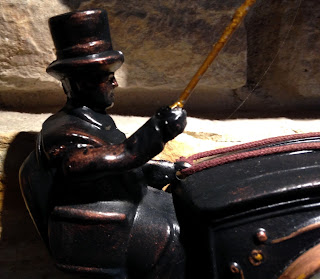 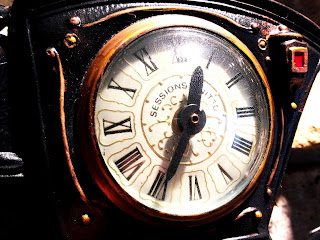 And now, the real piece de resistance of this ceremony, the Hansom Cab Clock Club's first animated GIF of a functioning clock, featuring Monica Schmidt's clock in actual whip-cracking motion. Viewers are forewarned that this being the first GIF created from a video by the staff of Sherlock Peoria, certain tightening processes to reduce memory size turned Monica's lovely video into a nausea-inducing bumpy ride if stared at for too long. Not that you need to stare at it for too long, but said GIF is not to be used as a hypnotic device, despite the seemingly mystic power of the Hansom Cab Clock itself.

Posted by Sherlock Peoria at 9:45 PM