Googling your way down to Baker Street.

I had the odd wrong thought as I was considering "The Five Orange Pips" this iteration through the Canon: John Openshaw, owner of a small estate in Sussex, died without any obvious heirs. Sherlock Holmes eventually retired in Sussex. What if . . . . ?

Well, the estate was near Horsham and Holmes's small farm was five miles from Eastbourne not far from the coast. Anyone who knows anything about Sussex would stop that theory from going anywhere before it was even fully verbalized. (No matter how attractive the thought of Holmes keeping an estate that would forever remind him of a man he could not save.) But I don't know anything about Sussex, hence my faulty thought.

But the means by which my theory was shot down was no big thing -- a quick trip to Google maps, where I saw that Horsham and Eastbourne were far, far apart. While I was there, however, I did think about John Openshaw travelling from his small estate near Horsham to 221B Baker Street, so I hit the "Directions" button and pulled up the route a modern Openshaw would have taken into the city. 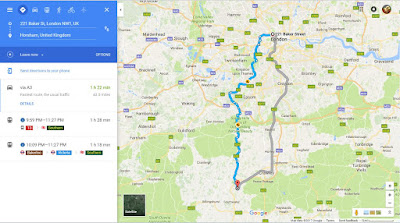 And there it was. With trains, travel times, etc. 221 Baker Street to Horsham.

Commonplace, right? No big deal, right? But can you imagine showing this to Julian Wolfe, creator of some damned fine Sherlockian maps back in the day? Pulling this up on a screen before the likes of Vincent Starrett or his St. Louis correspondent Dr. Gray Chandler Briggs back in the Depression era?

While my inner hipster wants to be all jaded about such everyday wonders, that combination of inner child and inner "Methuselah who remembers an Age When Things Were Different" just want to grin at this magical resource. Suddenly a commonplace old Google map transforms into an artifact of Sherlock Holmes's world!

So then I decided to just get a little bit nuts.

221B Baker Street to Reichenbach Falls. 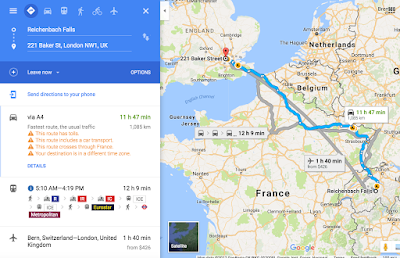 Twelve hours and nine minutes, without driving or flying. Of course, Holmes and Watson took over a week to make the trip, wandering a good deal on foot. (The whole trip on foot would take over a month, according to the Google.) Still, wonderful to see a computer doing Sherlockian scholarship of a sort with just a couple prompts. One can imagine having a fun evening charting out the travels of Sherlock's post-Reichenbach hiatus in this same sloppy, yet informative manner.

By now, many a young genius is probably recollecting how they did just that thing on Mapquest in 2006, but it still makes me marvel at the resources we have available to us with the touch of a mouse and a few taps on the keyboard. (Or a few taps on a smartphone . . . yes, even that mouse is starting to look like an eight-track tape at this point.)

And with a touch of Sherlock Holmes, it all becomes just that much more magical.


Posted by Sherlock Peoria at 9:44 PM