A rare moment for Sherlockians to gather,

Well, I'm now one up on Alec MacDonald.

Sure, Inspector MacDonald got to meet Sherlock Holmes, John H. Watson, and Professor Moriarty. I don't see myself ever being able to check that box. But I did get to see a total eclipse of the sun, which it is very, very, very unlikely that MacDonald did. I know this, because Janet Bensley, the new "Waxen Image" (vice-president) of the Occupants of the Empty House, explained those possibilities in detail as the moon started to move in front of the sun today.

A great migration of Americans headed down, up, or sideways to see the total eclipse today -- a fact that became frighteningly clear when they all decided to go home at once, or so it seemed. But even with something as once-in-a-lifetime as a solar event like that, it is vastly improved by doing it among Sherlockians at their old home base.

The Occupants of the Empty House, Southern Illinois's regional Sherlockian society -- a special rare thing as no major city can lay claim to it -- have been gathering at Alongi's restaurant in DuQuoin, Illinois for a very long time now, and the owners and staff know them well. So it was a very happy arrangement that allowed the Occupants to take use both the banquet room and the patio for a few hours today to have lunch in comfortable air conditioning on a hot and humid day, then step out on the patio as they liked to take in the eclipse.

We debated Moriarty's place as top villain in the Canon -- and voted he was not, based on a case I pleaded for another, whom you will hear about another day. But Moriarty's eclipse by another was just part of the fun. I took some pins and cards so we could make pinhole eclipse projectors in a "patriotic V.R." or other Sherlockian pattern of choice. Bottles of eclipse wine were both opened and auctioned, and a general camaraderie of everyone there just made the special moment in time all the better. 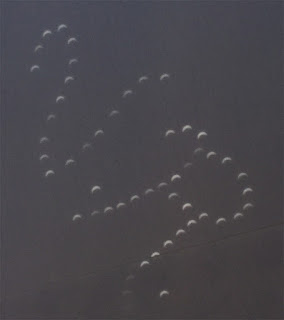 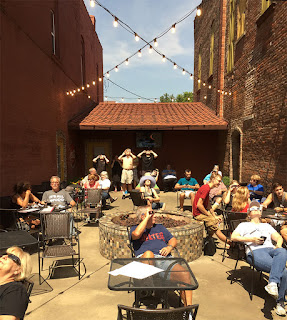 Sherlockians have an ability to make anything be about Sherlock Holmes, even though this was kind of an easy one, as Professor Moriarty did explain eclipses to Alec MacDonald using a globe and a lantern. (Which was good, as MacDonald surely never saw a complete one in person.) Following Sherlock Holmes is a hobby that will take you places you might never have otherwise gone, or appreciated nearly so well when you got there, and today was definitely one of those days for me.

And, as weary as I now am after the long journey home, I still have to give Holmes a big "Hoo-RAH!" for that.
Posted by Sherlock Peoria at 10:15 PM