There's a scene in the latest issue of Green Arrow comics (issue 28, story by Benjamin Percy, art by Juan Ferreyra), where that classic Superman foe Lex Luthor asks Green Arrow if he knows who his favorite literary character is.

"Sherlock Holmes," Luthor replies, "because he is always twelve steps ahead of everyone."

Lex Luthor then goes on to demonstrate his ample brainpower by making Sherlock-style observations about Green Arrow.

Now, it may seem odd that a classic comic-book super-villain has Sherlock Holmes as a hero, but Lex Luthor has gone through a lot of changes in recent years, and his most current comic book incarnation has a certain almost nobility about him. He's even on Superman's side quite a bit of the time, having seemed to have changed his mind about the Man of Steel, and Luthor even wears an "S" and a cape to deal with trouble.

And if Lex Luthor can find something heroic worth modeling in Superman after all this time, well, he was probably at Sherlock Holmes a long time before. He wouldn't be the first intelligent captain of industry to find inspiration in Holmes.

But it does bring us to the bigger question: Is Lex Luthor truly a Sherlock Holmes fan? Would he be a member of the Baker Street Irregulars of Metropolis?  For on Superman's Earth, are we so sure the B.S.I. began in New York? And if Luthor is an Irregular, who else in the DC Comics universe would head to New York in January as well?

Of course, New York has two doppelgangers on the world of DC Comics: Metropolis and Gotham City. And if there was a Baker Street Irregulars of Gotham City instead of Metropolis, what Sherlockian would we find there? While such a gathering might seem too frivolous for the Batman, his alter ego has often played the frivolous socialite. Bruce Wayne might have found a once-a-year banquet just one more easy activity to cover a true obsession with crime.

Of course, there was that time in the 1980s when Batman actually met Sherlock Holmes . . . 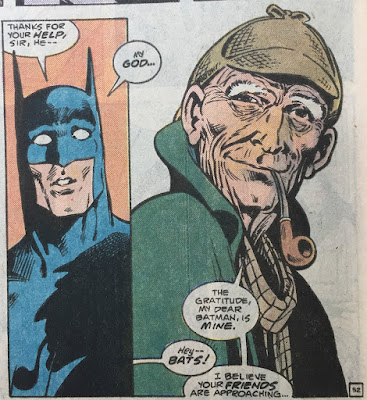 In Detective Comics, issue 572 for March of 1987, we find Batman in a rare condition: total astonishment. And what's he astonished at? Not that he has encountered an aged Sherlockian cosplayer in a deerstalker with a pipe. No. Batman has run into a person who not only shouldn't be alive, he's run into someone who shouldn't exist. And someone whose sudden existence appears to be very important to him. Like it would a proper Sherlockian.

So do we now find that Bruce Wayne and Lex Luthor might have had something in common besides being two of the wealthiest men in Metropolis and Gotham City? Could be.

Sherlockians do show up in all sorts of places, something that should surprise none of us.
Posted by Sherlock Peoria at 1:55 PM