With Monday bringing a total eclipse of the sun to parts of the U.S. near to Sherlock Peoria, the time seems night to recall another eclipse from fourteen years ago, involving Mr. Sherlock Holmes. 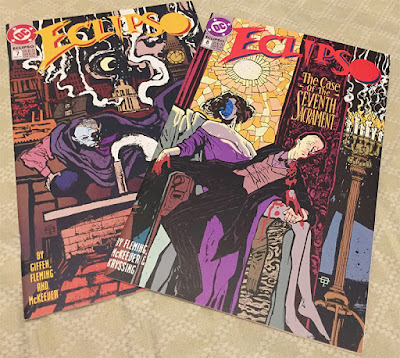 The medium was comics, and DC had taken to publishing a book featuring a strange character named "Eclipso," a sort of supernatural Jekyll-and-Hyde who was less about two sides to one person and more about a comic booky sort of demon possessing people. Since the true entity called Eclipso was not human, it existed throughout time, and in May and June issues for 1993, Eclipso came to the London of Sherlock Holmes.

First possessing a judge in Eclipso #7, the entity's host met a tragic fate, but upon his demise the final page of the story finds Eclipso in a new host -- Irene Adler -- with the King of Bohemia tied to a bed in his boxers.

"Irene has always wanted to kill -- the KING OF BOHEMIA!" the possessed adventuress announces in the final panel, with a blurb reading "NEXT: GOOD NIGHT, MISTER HOLMES!" just below it.

So coming to Eclipso issue #8, written by Robert Loren Fleming, we immediately see a desperate man, running for his life, and coming to Baker Street. He barges past a sleepy Mrs. Hudson, whom Holmes and Watson also pass on their way to the sitting room (curious layout to 221B in this comic!), and is given a tall glass of something alcoholic by Watson. Holmes mentally relives "A Scandal in Bohemia" over the course of three pages, and then we come back to Godfrey Norton and his tale of his wife seemingly becoming supernatural and disemboweling the King in Norton's bedroom.

Now comes spoiler territory, so if you'd like to read this tale for yourself, I'd recommend you go find a copy and do so now. Because I'm about to spill the fun stuff.

Irene, now darkly super-powerful, kills Norton, wraps a fireplace poker around Sherlock's neck, and has a bullet from Watson's revolver bounce off her. In the resulting struggle to save his friend, Watson accidentally grabs one of the Eclipso gems that caused Irene's possession and becomes an Eclipso himself.

With the rising sun, Irene reverts to normal, and Eclipso Watson flees, hiding in a church out of the sunlight. (Eclipsos are a bit like werewolves, and can't exist in sunlight, it seems.) Holmes follows him, and Irene follows Holmes.

Now, let me give fair warning, should you ever decide to read this tale from 1993: Irene Adler is not quite the clever lady we remember her to be. She defeats Eclipso after discovering she killed her own husband while in his thrall, but in a really stupid fashion that finishes her as well.

Sherlock is sharing a moment with Watson when he realizes what Irene has done, so he has to share a moment with her before she dies. And then we get an epilogue of Holmes with his bees and his housekeeper on Sussex Downs remembering the adventure and considering his own eventual death.

This is not a happy tale, and the art by Ted McKeever is somewhere between stylized and just seeming sloppily done in haste. Still, the story is fairly good and it makes a nice oddity in one's collection of Sherlock Holmes comics.

Hopefully, Monday's eclipse will not be so hard on Sherlockians as Eclipso was on Irene.

Posted by Sherlock Peoria at 1:14 PM