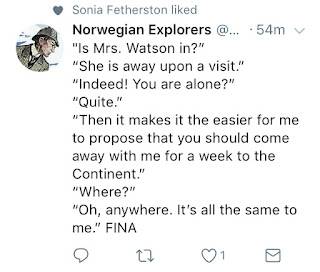 While I usually depend upon Sonia Featherstone for my Sherlock Holmes quotes on Twitter, it was the Norwegian Explorers of Minnesota who dropped a stimulating little exchange online this morning: the conversation Holmes and Watson have as Sherlock invites John to flee Moriarty with him.

Re-reading that little scene this morning all by itself, it really brings out the importance of Mrs. Watson being away . . . and makes on wonder what would have happened if she had been home that night.

After Watson states that he is alone in the house, Holmes replies, "Then it makes it the easier for me to propose that you should come away with me for a week to the Continent."

This isn't the normal, "running off for a case for the day" thing Watson's wife is used to. This is leaving his wife for a week to accompany a man who knows killers are after him. This is "long vacation with a chance of death" -- not something most spouses go for in allowing their significant other to go out.

Mrs. Watson could have, and should have, said "no."

Which changes everything. Holmes tells Watson about Professor Moriarty that fateful night, and then . . . disappears, his fate unknown.

But "fate unknown" isn't "left a note explaining how he was going to die." Would Holmes have told Watson enough that night that the doctor would have though his friend was dead? Or would Watson remain solid in the belief that Holmes somehow survived his disappearance, was still on the run, and might one day return?

Watson wasn't really needed for this particular case. He's no bodyguard, and not aiding in undoing Moriarty in the slightest. In a way, it's just his unknowing "good-bye tour" with Holmes. But Mrs. Watson wouldn't know that.

Would Mrs. Watson saying "no" that night actually have been a kinder fate for John H. Watson?

Still a happy reunion can be had when Sherlock Holmes returns, but we don't get "The Final Problem," as Watson has no tale to tell there. Do we get the rest of the Adventures and Memoirs from a Watson who is just waiting for the return of his friend and not memorializing him? The short stories didn't start until after Holmes's hiatus began. Maybe now those don't start until Watson starts giving up hope . . . and what if he didn't?

A Mrs. Watson who was home the night "The Final Problem" begins could have changed the entire Canon as we know it. It's an alternate universe that might even make for an interesting novel premise one day. (Though writing novels about Holmes without Holmes takes more skill than most of us can pull off.) It's a different world of Sherlock Holmes when Mrs. Watson's presence is truly felt, which makes me then wonder about her existence to begin with.

That, however, is a topic for another day.
Posted by Sherlock Peoria at 7:26 AM