A day in Dayton.

It's been quite a few years since I poked my head in any of the more traditional Sherlockian venues. The all-day Saturday program of speakers with a Sherlockian weekend built around it is the sort of function I've enjoyed since John Bennett Shaw was putting them on, and the good Carter and I travelled to Illinois Benedictine College for just such an event in 1983.

Few have had runs as long as the one that gets called "the Dayton symposium," existing under different names with different program-runners, going back . . . decades. I didn't make the trip for the first incarnations, had the fun of finding my speaking comfort zone there during some of the middle years, then missed some transitional years as it found its way to "Holmes, Doyle, & Friends." This is the fifth year under that title, and I am happy to report that it's doing quite well.

While there might have been a sad moment of remembering those faces who weren't there, having moved out of state or from this mortal plane entirely, I was shocked at all of the familiar faces that were still there, almost like no time had passed. Adding to that timelessness was looking around the room and seeing over fifty people without phones in their hands. Not that I have an issue with the habits of our modern tech culture -- my own phone finds its way to my hand more than my partner would like sometimes -- but the day was so relaxed and engaging enough that I almost forgot that this was 2017 and the era of staying connected.

In fact, I forgot about my phone so much that I only took one picture, the coincidentally numbered "IMG-0221." 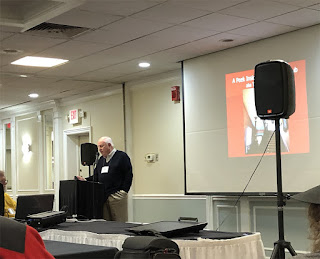 Don Curtis was the first speaker to use PowerPoint and I suddenly realized I had picked a horrible seat, even though it put me next to two very pleasant Sherlockians, Mel Hoffman and Pat Ward. (With Bob Cairo on the other side, lest you only think I'm going to mention Indianapolis area Sherlockians.)

As with any multi-topic Sherlockian program, subjects ranged from general Victorian/Anglophile areas of interest like  clubs or afternoon tea to the Canon-specific like Mary Morstan to those that mixed real world areas of study with Holmes himself. Here are some specific random notes:

• Excellent case for giving Mary Morstan-Watson her true prominence in the Canonical hierarchy by Ray Betzner, when most of us didn't realize how badly she was getting snubbed. (And why.)

• Two-thirds of the Sherlockians present seemed to have gone to London. Most were very interested in clubs.

• More fans of Jeremy Brett at Dayton than Benedict Cumberbatch. But that autographed staring face picture of David Burke just wouldn't sell. And yet that stare.

• Mark Friedman, creator of the stage musical Sherlock Holmes and the Mystery of the Crown Jewel, was the perfect after-lunch choice to keep us from napping.

• Comforted to know that neither my house-mate nor myself qualify as hoarders, despite occasional worries of same. Thanks, Monica!

• Sherlock Holmes's actual involvement in the Ripper murders was clearing his cousin. Thanks, Steve!

• Brent Morris knows how to explain a familiar Sherlock Holmes skillset like cryptography in a way that will make you think Holmes is even smarter than you already thought he was.

• There were a lot of parts of Victorian justice that Sherlock Holmes didn't have anything to do with, which Liese Sherwood-Fabre walked us through.

And now, an important correction to something that came up, and I totally told Steve Doyle a wrong thing on: It was not Sterling Holloway, the voice of Winnie the Pooh, who was possessed by Jack the Ripper on Star Trek. It was John Fiedler, the voice of Piglet. So close!

In any case, thanks to the Agra Treasurers for a great day, and I wish I could have stayed for the evening banquet, or been at the welcome reception the night before. I was really squeezing this one in this year after a long absence, but it was well worth the drive, and I'm definitely going to try to get back next year. (And have more money budgeted for the many great dealers!)
Posted by Sherlock Peoria at 11:14 PM