Still finding his place in comics.

In 2018, Hollywood has long figured out that comic books can make good script-fodder. Less discerning eyes may just go "superheroes are trendy," but those of us with a comic book past can easily see the truth: It's not the superheroes, it's the stories. The successful movies have been the ones that mined the vein of ideas built over decades upon decades in the medium.

So where does Sherlock Holmes figure into all of this?

Well, for as many Sherlock Holmes comics as I have stacked on my shelves, Holmes still hasn't seen the comic book equivalent of The Seven-Per-Cent Solution, BBC Sherlock, or the Rathbone/Bruce movies. To this date, there hasn't been a breakout success for Sherlock Holmes in comic books.

With the grand success of moving Marvel Comics to the big screen, one of the saddest parts is that Marvel doesn't even have a B-level character who wears a deerstalker, like rival DC's Detective Chimp. And Warner Brothers's sputtering attempts to create a DC Comics cinematic universe means seeing Detective Chimp on the big screen is a long ways off.

With this week being "Free Comic Book Day," the annual celebration of comics by their retailers (one of the few retail areas to remain fairly non-corporate), it's nice to see Holmes represented by a new comic in stores. But like its predecessors, it doesn't seem like the one that will take Holmes to his first breakout comics hit. 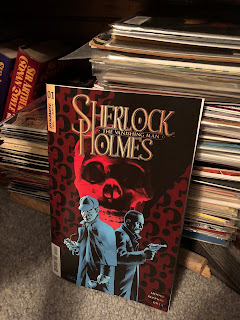 Sherlock Holmes: The Vanishing Man  isn't Dynamite Comics or writer Leah Moore's first attempt at a Holmes comic, and I almost didn't pick this one up, not having been too impressed on that score. But I added it to my pull list (a necessity to make sure you get something in the modern comics business model) before I knew who the writer was.

The delightful surprise about Sherlock Holmes: The Vanishing Man is the art inside. The cover is by a different artist and rather "Eh!" but inside Julius Ohta does the art chores with a style that is clean, great to look at, and makes the book stand out. In fact, it's a little too good in the set-up of the mystery, making one particular detail clear that I'm certain will be a big twist later in the story.

The biggest twist in this particular issue, however, is . . . .

[SPOILER ALERT! Though, really, if you haven't bought and read this comic by two days after its release, you're probably not someone who haunts comic stores enough to care, but still . . . SPOILER ALERT!]

Moriarty just happens to be at the pharmacist when Wiggins goes to get Holmes's drugs. And he's a young Moriarty with a grin.

At this point, I don't think Moriarty showing up is ever really a twist in a Sherlock Holmes story, but it's a movie/TV standard in everything that's been a success, so one really can't blame comics for bringing him in just as often as well.

Just as movies have looked at successful (and unsuccessful in the case of Guardians of the Galaxy and Black Panther) comics and found inspiration there, perhaps it's time that comics looked at what has worked and hasn't worked in movies and TV and used a little of that to make Sherlock Holmes work in their equally visual medium.

Because Sherlock Holmes is still working after all these years. It would just be nice to seem him do it well in comics as well.


Posted by Sherlock Peoria at 6:50 AM