Warlock Holmes to the rescue!

"Stand at the window here. Was there ever such a dreary, dismal, unprofitable world?"

Today was one of those days.

You know how the world is these days. Incompetence in places where skill and savvy are needed. Simple tasks that require wading through systems designed to profit someone who isn't you. Coupled with the demands life makes anyway, it's a wonder that depression isn't as common as the cold. (And maybe it is.) Weariness sets in, and it seems like all the spark has gone out of everything.

A few years ago, however, a little Las Vegas improv, parking, and weather podcast called Matt and Mattingly's Ice Cream Social had a mention of a new Holmes book coming out called Warlock Holmes: A Study in Brimstone. I was intrigued, but there are so many Sherlock Holmes books out there of late, and so many disappointments. I put picking up Warlock Holmes on my literary to-do list, and there it stayed, not helped by a certain other supernatural Holmes novel that still remains barely-read on my nightstand or the YA series books that are doing so well in recent years.

But today, the word came across the wifi: The third book in G.S. Denning's Warlock Holmes series, Warlock Holmes: My Grave Ritual, was being released today, and would even be in my local Barnes & Noble. And like I said, today was one of those days. So I took a chance.

I went to Barnes & Noble, and I bought all three Warlock Holmes books. I came home and immediately dove into the first one, the aforementioned A Study in Brimstone. Not a bad start, as I passed the first page, a fresh re-telling of the opening of A Study in Scarlet. And pretty soon Watson wrote something that made me chuckle. And then a Stamford bit that made me laugh a little more. And by the time I hit the moment Dr. John Watson meets his Holmes . . . Warlock Holmes . . . the first words out of Holmes's mouth broke me up. I re-read them aloud to the good Carter and she broke out laughing.

After the first fifty pages, I had to stop for some exercise and a few chores, followed by this blog post, but I'm eagerly looking forward to diving back into this terrific comic take on Sherlock Holmes. Even though his name is "Warlock" and he's up to something not very scientific, Warlock Holmes is a better Sherlock than many who use that name these days, and better still, when I put it down after that first fifty, I remembered how "funny" worked . . . something that Sherlockiana sorely needs more of, as so many pastiches seem to forget that Sherlock Holmes was a funny guy, And funny doesn't come easy.

Especially these days. So finally getting around to Warlock Holmes after all this time? It's looking a little bit like perhaps I was subconsciously saving this one for a rainy day.

And, damn, it's good so far. I'll keep you posted. 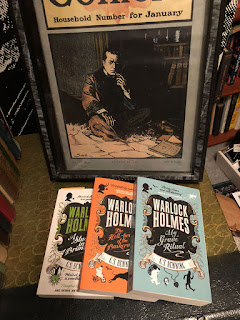 Posted by Sherlock Peoria at 8:20 PM