Before I go back to bed

A monkey dressed like Sherlock Holmes walks into a bar.

It's 4 AM and you couldn't get back to sleep anyway. Whether it's the funny tasting tap water from the new pipes or the touch of tendinitis reminding your of Watson's shoulder wound, you're up. And the first issue of Justice League Dark is just sitting there, with Bobo the Detective Chimp on the cover.

And Bobo, it turns out, is in this magical bar.

Which then reminds you, hey, you used to hang out in a sort-of magical bar. The main magic was that it was actually always 1895 in the bar and that there were some real characters showing up in the place. And, as such places do, that thought leads to remembering all of the other characters who have graced your life. The partners, team-mates, loves, and bastards. And the fictional characters, too, the ones that nobody really knows about.

It's 4AM and those are the kind of thoughts you have, because, I guess, you should be dreaming at such an hour and the ol' brain is kinda loose and playful the way it would be if it were dreaming. And if you're very lucky, none of the daytime thoughts of responsibilities and chores are around to bother you.

The tale of the monkey in the bar is pretty vague and ominous, the way a lot of comics have been of late. Trying to tell big new tales of bigger than ever cosmic forces nobody ever heard of before. But you probably enjoyed the new tale of the spider guy better, because he's back to being a loser again, which was always his strong suit. Because most of us can relate to the guy who everything goes wrong for. Water pipes get leaky and need replacing, you wake up at four in the morning for no reason, and the "ghosts of how things used to be different" drop by to make you laugh, instead of rattling chains like Jacob Marley.

And somehow it all winds up being about Sherlock Holmes, but you just don't want to tell anybody about it just yet. But there it is. 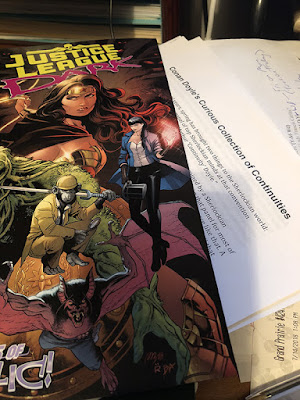 Posted by Sherlock Peoria at 5:10 AM