I think Sherlock Holmes would have really liked social media.

The best evidence of this is, I think, when Watson drops a case in his lap in "The Adventure of the Engineer's Thumb." Usually, when we see Holmes, he's bringing Watson into a case, or he has just learned of a case, but in "Engineer's Thumb," we get this capsule of leisure:

"Sherlock Holmes was, as I expected, lounging about his sitting-room in his dressing-gown, reading the agony column of The Times and smoking his before breakfast pipe . . ."

It makes a certain sense that he would pick the agony column out as a part of his morning routine -- if a crime was big enough to make the news sections of the papers and he hadn't heard of it from Scotland Yard yet, chances are it wasn't complex enough to stimulate his before-breakfast mind. He could always get to the crime news later in the day. But the agony columns!

To a mind like Holmes's, those little glimpses of life afforded by the personal ads were something he could conjure upon, warming up his powers of logical synthesis.

". . . there are many ciphers which I would read as easily as I do the apocrypha of the agony column, such crude devices amuse the intelligence without fatiguing it."

He was talking about ciphers in that instance, but it says something about his feelings toward the agony column . . . even a crude cipher would take a slight bit of intellect to read, not being foreign languages that someone gets fluent in. The ads of the agony column where like a daily mini-mystery book for Holmes, where most were perhaps too ridiculously simple, but a choice few intriguing enough to save in a scrap-book for future reference.

"Surely Jimmy will not break his mother's heart . . ."

Every one of those had some potential turn of events connected to it that Sherlock Holmes found them worth filing in his great book. (I am operating, of course, on the premise that he didn't save the entire agony pages -- in which case, he wouldn't have needed the book!)

Any writer worth their salt could take one of those simple lines and conjure a tale from it, and Sherlock Holmes could see them going ways that he couldn't even fathom based on that little bit of evidence, but saw the possibility that the lady with the black boa was up to no good, or that something untoward had happened to Jimmy, or that a lady's fainting might have been the first symptom of her murder -- all things he might like to be able to refer back to, should the need arise.

Who knows? That "Jimmy" who was causing his mother such grief might have even been Dr. James Watson, whose mother had been brought to Britain since his first meeting with Sherlock Holmes. (Ah, but I'm starting to head down a rabbit hole I don't want to expose until August's "Holmes in the Heartland" conference in St. Louis.)

In any case, what Sherlock Holmes gained from those "agony columns," he could have found in great abundance on social media. And I suspect he could have had some great fun with it . . . when he wasn't stumbling on to the ridiculously big fish swimming the criminal ponds of today. 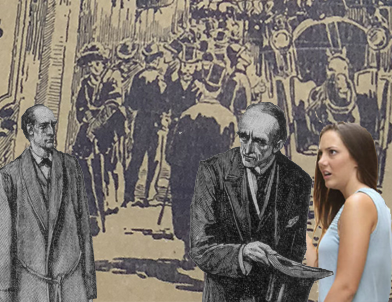 Posted by Sherlock Peoria at 7:06 PM