Shall we ballyhoo? Let's!

Now, you may have seen a tweet or two encouraging you to register for "Holmes in the Heartland," a weekend event in St. Louis on August 10 thru 12. The deadline for registration is July 21st, which is in a two week ticking clock at this point.

If you're considering taking a day or two to run to St. Louis and haven't signed up, let me tell you a thing or two that might encourage your attendance. First? Let me tell you about last night.

Last night, I came home from work and sat down at this very computer to look at some research I'd been doing in preparation for this very event. And what I saw, in that brief half hour before I had to take the good Carter out for Friday night pizza, sparked a mental blaze that had me quickly scribbling a single sentence on a legal pad for fear the idea would get lost. Then, as we travelled the old Peoria streets to get to a classic pizza venue we had not seen in perhaps thirty years, two words came into my head . . . two words that had to be typed into my smartphone the minute we sat down in the pizza place . . . two words that looked very much like the beginning of a new field of Sherlockian science.

And then I looked up and saw this clock. This time-running-backwards clock. 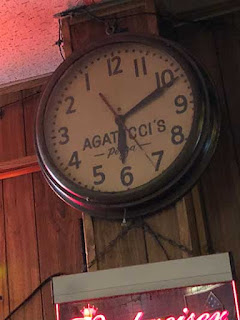 The restaurant became very crowded very quickly, as patrons entered en masse, looking like they'd been coming to the place for their entire lives, perhaps still wearing the togs of their youth. Just as the clock foretold, time seemed a bit out of whack, and the thoughts I had conjured before dinner continued through my hastily handing the waitress the check and a wad of bills on our way out the door. I was soon home and back at the keyboard.

What followed was the typing of a madman, producing page after page as he attempted to capture a mental construct of Lovecraftian proportions, working far into the night. Enough work for an entire presentation at a Sherlockian conference like "Holmes in the Heartland," and yet not enough. This was just the base coat, the primer, the underlayer before a colour of Sherlockiana is applied that human eye has never seen before is painted on top.

The base price for the core "Holmes in the Heartland" is fifty bucks, which may seem like a lot for just a Saturday, but you get lunch, as well as: Tim Johnson, curator of what is probably the greatest public Sherlock Holmes collection in the world.  Don Hobbs, Texas bon vivant Sherlockian who managed to acquire and catalog more translations of Sherlock Holmes stories than any human before or since. Bill Mason, a Sherlockian gentleman of letters whose charm and wit has bespelled many an audience. Mary Schroeder, a keystone of St. Louis Sherlockiana and founder of the cities Sherlockian research collection. Dr. Tassy Hayden, one of the most active minds of the Sherlockian generation that has started taking up the reins of this old hobby. Bill Cochran, a prolific writer, editor, and scion master whose Sherlockian works cause others to pale by comparison. Baritsu fighters! A traveler through time!

And this one utterly mad old Sherlockian theorist who is about to propose a new paradigm of Sherlockian study. Yes, I said it: New Paradigm. Get ready for some real Alvin Toffler future shock, people-old-enough-to-know-who-Alvin-Toffler-was!

Whether you go with that base package mentioned above, or add Friday and Saturday options for more weekend fun, spending a day or more in St. Louis in August is going to be a hot ticket. You never know how these things are going to go, and if a well-known Sherlockian finally goes off the rails in public, you're have a story to tell the Sherlockian grand-kids about one day.

Here's the sign-up link. Hope you get the chance to come!
Posted by Sherlock Peoria at 9:21 AM