One cold February night, as I was returning from a patient call in Marylebone, I saw an opportunity to stop in at Baker Street and see my old friend Sherlock Holmes. His minion and landlady, Mrs. Hudson, gladly sent me up the familiar seventeen steps with the glad news that he had already had a full supper that evening, and I found him perched on the mantlepiece, looming over all of the day's newspapers, which he had spread across the floor as was his habit. His vision in those days had become so keen with the powers of a vampiric predator that he neither dim light nor fine print nor a distance of twelve feet were any impairment to his ability to read.

Those eyes sparkled at the sight of me and he smiled, not bothering to hide his fangs.

"Ah, this is a grand evening!" he declared. "Both an intriguing case and my beloved friend appearing within the same hour? I am doubly blessed."

"HAW! HAW! HAW!" came a protest from the bedroom door, and Holmes's husband Maurice came waddling out with his flippers outstretched in warning. Even though theirs was a marriage of convenience arranged for Holmes's brother Mycroft's occult purposes, Maurice still did not enjoy my presence in their home, given my past relationship with his mate.

"This is professional, Maurice," Holmes said in a firm, yet soothing tone. "Dr. Watson will be of great aid to me on this matter of Mr. Paul Thomas Miller's predicament. A simple advertisement he placed in the agony columns of several London papers has caused several individuals to knock themselves out."

"Is that even possible, Holmes?" I asked.

"Only for a skilled pugilist," he replied, and swung his fist up, connecting with his chin and knocking himself off the mantlepiece. He landed, of course with the grace of a cat in front of the hearth. "Were I still human, that would have rendered me unconscious. Still, you see the technique."

"Mr. Miller, it seems, has recently returned from the deepest jungles of South America, pursuing the missing link," Holmes continued, "and feels that the ads were meant for him in some way. We should speak to him at once, if you are not otherwise occupied."

"My rounds are finished, and my house is currently a bachelor establishment, so I see no impediment," I replied.

Minutes later, Holmes and I were in a hansom cab, rattling down Regent Street, with Mrs. Hudson calming Maurice with some fresh squid in our wake.

(These stories are so much easier to start than to solve, aren't they? In any case, the preceding was spawned by the below pair of tweets today.) 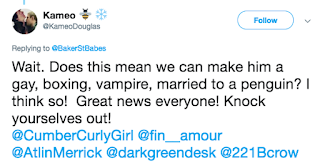 Posted by Sherlock Peoria at 2:04 PM